Our client, age 30, was charged with her third residential burglary in four years.  It was a tragedy insofar as she had three children, ages 13, six and seven, as well as five stepchildren with her wife.  The stepchildren were 14, 10, 8, 7 and 4 years old.

As known by some, she and three others had “gone to the circus.”  In other words, they allegedly tried to break into a home tented for fumigation purposes, so it looked like a circus tent as one would associate with the Ringling Brothers or Barnum and Bailey Circus.

In a Nutshell:  Female client charged with her third residential burglary in four years, arising from being the get-away driver for two mean trying to burglarize a Manhattan Beach home tented for fumigation.  Client had seven children with her wife.  Case filed in Torrance and resolved for seven years in state prison.

The police report alleged that our client drove two men, one age 29 and one a juvenile to a home in Manhattan Beach, stopped briefly to allow them to exit the car and then drove off only to turn around and position her car to exit the neighborhood.

As she came to a stop in front of the house, the next-door neighbor coincidentally pulled into her own driveway at the same time.  The woman noticed two African American men exit the car and speak through the driver’s side window with our client.  The woman’s suspicions were aroused.

The woman went into her home and told her husband what she had seen.  The husband quickly made sure their home’s security video cameras were pointed along the side of their house bordering on the neighbor’s home, tented for fumigation purposes.

The husband watched the video as our client’s two friends walked down the side yard of the house toward the tented home’s backyard.  He then decided to confront the two suspected burglars and told his wife to call 911. 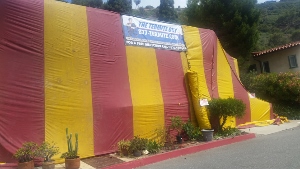 As she did so, the husband walked into his neighbor’s backyard, yelling, “Hey, what are you guys doing?  Hello?  Excuse me.”  In response, the two burglars walked toward the husband and then once out on the street, ran down it as police officers, sirens sounding came toward the house.  Police pulled over our client driving the “getaway car” and arrested her, as well as her two male friends.

Nothing had been stolen from the house and in fact, it was quite unclear if the two men did anything to the home except possible move the heavy weights off the edge of the tent, which otherwise held the tent edges to the ground, and several metal clips that were attached to the tent.

Our client, however, as well as the other adult male, were charged with attempted residential burglary (Penal Codes §§ 664/459).

Our client faced life in prison due to the case being a third strike offense, as well as two five-year consecutive terms, plus two one-year sentence enhancements due to her prison priors.  She initially opted for representation by the Torrance public defenders’ office.

The assigned public defender did a very excellent job, negotiating the plea bargain down to nine years in state prison, based on one of the prior strikes being “stricken” for purposes of sentencing.  The client then faced the mid-term of four years, halved for the attempt to two years, but doubled for the prior strike, to make four years.  Five years was then added for the one prior strike with a prison prior to reach a nine-year deal.

The client’s wife was upset at the plea bargaining efforts of the assigned public defender, so she called Greg Hill & Associates and spoke to Greg Hill.

Greg listened to the client’s wife explain the facts and then spoke with the assigned public defender about the status of the plea bargain negotiated thus far.

Greg then spoke to the client’s wife and explained that the plea bargain offered so far was actually quite good, but Greg thought there was a small possibility he could reduce the offer to seven years with more work.

The client’s wife then hired Greg Hill & Associates.  Greg immediately contacted the assigned district attorney and prepared a lengthy defense position letter and mitigation packet.  He then met with the supervising attorney and the assigned district attorney, explaining that since no DNA was taken from the clips, a jury might conclude that the two men never even made any effort to break into the house by first getting past the tent over the house.

In fact, their stated reason to the police that they went to the backyard to merely urinate may be credible to the jury and a not guilty verdict for our client was realistic.

This factual issue, as well as the extensive mitigation packet submitted (including over fifteen letters attesting to the good character of our client), persuaded the head district attorney to improve the offer to seven years, which our client accepted.

With her presentencing custody credit, our client would be out in approximately five years after serving 85 percent of the remaining sentence, far less than the 37 years to life sentence she faced if found guilty by the jury and sentenced by the judge.