Our client was just eighteen years old and working his first job in his life.  He was a high school graduate and attending Santa Monica City College.  He had been lucky enough to get a job at Macy’s in the Manhattan Beach mall.
During the course of his job, he began taking home items from the store.  After two months on the job, the employer noticed this and confronted him.  In response, he quit and shortly thereafter, Macy’s contacted the Manhattan Beach Police Department.

In 30 Words or Less:  Client, age 18 and while working at Macy’s, steals $1,114 in clothes from Macy’s.  This was embezzlement, not shoplifting.  Case resolved for an infraction as a violation of Penal Code § 490.1 as long as the client did 20 hours of community service.

The Manhattan Beach Police Department then telephoned our client to request an interview to confirm the facts as alleged by Macy’s.  Our client’s mother would not allow her son to speak to the police, but she gave the police the confirmation of events that only her son could by explaining things to her.  She offered to return the clothes that her son had taken, which were three jackets, three shirts, one pair of sweat pants and one tank top (mostly by Puma).  The clothes were valued at $1,114. 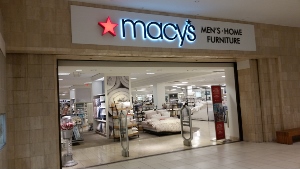 Entrance to a Macy's Store
The client’s mom then tried to return the product, but it had been worn and even washed several times.  Some of the clothes were rumpled up and smelled like sweat.  None of the clothes still had the price tags on them.  Macy’s refused to accept the return of the clothes.
The client’s mom and her boyfriend then called Greg Hill & Associates.  Greg discussed the facts of the case with the two and suggested that the client take an online shoplifting prevention course ASAP as offered by Tom Wilson Counseling, Logan Services or the National Association of Shoplifting Prevention.  Greg explained that taking the course early can be interpreted by the handling prosecutor as a reflection of the client accepting responsibility for his actions and therefore, leniency in punishment would be appropriate.
While explaining that leniency in punishment would be the goal (and more likely because of the client’s youth) and even explaining that pre-plea diversion under Penal Code § 1001.1 would be possible, Greg also explained that the thefts constituted embezzlement (Penal Code § 503) and the prosecutor had discretion to charge each taking separately, meaning there could be eight counts, one for each item taken on a different date.  Greg further explained that because the total dollar value of the items taken was about $950, the case could be charged as felony grand theft (Penal Code § 487).
The client thereafter completed the online shoplifting prevention course and gave Greg a copy of his proof of completion to take to court.
Greg then appeared for the arraignment at the Torrance Superior Court, concerned that the case could be charged as a felony and equally concerned that the case would be brought as eight counts of embezzlement or even eight counts of petty theft.
Luckily, however, the case was charged as a single count of shoplifting under Penal Code § 459.5 and not embezzlement (Penal Code § 503) or grand theft (Penal Code § 487).  Greg then discussed with the Torrance District Attorney the client’s young age and showed the proof of his completing a shoplifting prevention course.  Greg did not really want to discuss the case facts, which suggested shoplifting was an inappropriate charge.  Luckily, the prosecutor did not address this.
Greg then requested that the client be allowed to earn a dismissal under the Penal Code § 1001.1 program.  The district attorney considered this and instead offered to reduce the charge to infraction by amending the complaint to allege an infraction under Penal Code § 490.1 if the client performed twenty hours of approved community service.
The client was quite happy with this, as he understood the case really could have been charged as a felony.
For more information about embezzlement, please click on the following articles:
Contact us.
Serving Torrance, Long Beach, Compton, Airport Courthouses and Other Courthouses.