In the late summer of 2017, our client, age 29, was stopped for DUI after Long Beach police officers parked outside a bar in Signal Hill followed her after she ended her shift as a waitress there.  Police told her that she was swerving all over the road, but when our office obtained the MVARS, or mobile video audio recording system (or “Dash Cam”), we saw no evidence of any unsafe lane change or even swerving within a single lane.
Our client’s blood alcohol content, as determined from her breath sample given at the police station, was 0.095% and 0.097%.
Our office therefore filed a motion to suppress evidence, arguing that the traffic stop was not supported by reasonable suspicion that a violation of California law had taken place and therefore all evidence obtained thereafter must be suppressed as “fruit of the poisonous tree.”
We argued that because the MVARS failed to corroborate “pronounced weaving” as is required under People v. Perez (1985) 221 Cal. Rptr. 776, at 778, which states that “pronounced swerving of more than six inches into the adjacent lane” must be seen by the officer to make a legal traffic stop, the traffic stop was illegal. 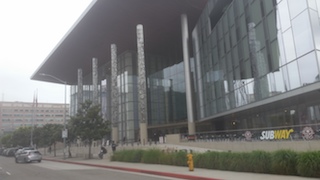 Long Beach Courthouse
At the hearing on the motion, the arresting officer testified that before he turned on the MVARS to record his observations, he observed our client swerving more than six inches into the adjacent lane.
The Long Beach judge hearing the motion then denied our motion and our client accepted a plea bargain wherein she pleaded no contest to a violation of California Vehicle Code § 23152(b) and was placed on three years of informal, or summary, probation, with a requirement that she enroll in and complete a three-month alcohol awareness program (the AB541 program) and pay a court fine of $390, plus penalties and assessments, less credit of $125 for one day in custody when booked, which was applied toward the base fine, meaning she would owe a total of approximately $1,400.
Our client then completed the AB541 program and paid her court fines within six months.
She then moved to Michigan and entered a college program to become a licensed drug and alcohol counselor.  When she was half-way done with her 36 months of informal probation, our office contacted her about early termination of probation, which she eagerly agreed to request because she learned that she could not become a licensed drug and alcohol counselor while on probation for DUI.
Our office prepared, filed and served the motion for early termination of probation.
The same judge who denied our client’s motion to suppress then granted the motion for early termination of probation, ending our client’s probation at 18 months.
Our office then asked the client if she was interested in expungement of the conviction for DUI.  The client responded “I sure would like to have this erased from my record.”
Greg responded by explaining that expungement under California Penal Code § 1203.4 did not erase the conviction from the client’s criminal history, but it changed the last plea in the case back to not guilty (restoring it to the original plea) and dismissed the case.
The big value of expungement, Greg explained, was that it permitted one who obtained such relief, to legally state in response to most employment applications that he or she was never convicted.  Greg then explained that the exceptions to this “legal fiction” permitted were for applications for a state license, so Greg recommended that the client consult with a licensing attorney in Michigan before applying for her drug and alcohol counseling license in Michigan.
Greg Hill & Associates then prepared, filed and served the petition for dismissal (expungement) in the Long Beach Superior Court.  We also paid the $120 filing fee required by the court.
The same judge who had presided over the case from the start granted the petition for dismissal, which made our client very happy.
For more information about expungement, please click on the following articles:
Contact us.
Serving Torrance, Long Beach, Compton, Airport Courthouses and Other Courthouses.