Our client, age 34, went to her employer’s Christmas party with her husband.  It was in Newport Beach and our client lived up in Long Beach.
The alcohol was flowing at the party and our client had two or three drinks, which was far less than most other people at the party.  One wife of an employee drank so much that she vomited at the party, at the dinner table no less.  That put a damper on everyone else’s evening.
Our client and her husband left the party rather early, about 11 p.m.  Our client was the designated driver, since she drank less than her husband.
The two headed northbound on the 405 from Newport Beach.  There were no problems until the couple exited the freeway at the Orange Avenue exit.  At the top of the exit, there is a stop sign.  According to a CHP officer monitoring the exit, our client failed to come to a complete stop at the top of the offramp.  Consequently, he pulled over our client just a few feet after she moved forward from the stop sign. 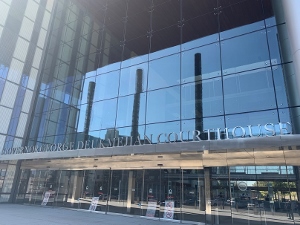 Long Beach Courthouse
The officer could see that our client was dressed like she had just been to a party, so he immediately asked her if she had consumed any alcohol during the evening.  Our client truthfully replied that she had.  The officer then told her why he had stopped the car and proceeded to check our client’s registration and proof of insurance.
For some reason, the CHP officer took 17 minutes before he returned to the client’s car to give her back her insurance and registration.  All the while, our client waited with flashing red and blue lights lighting up their car.  Our client and her husband certainly did not feel free to leave the scene.
The officer then began his DUI investigation and allegedly noted the objective symptoms of alcohol intoxication – bloodshot, watery eyes, slurred speech and a staggered gait.  He then had our client submit to a preliminary alcohol screening (PAS) test and her breath measured a blood alcohol content (BAC) of 0.11%.  She was then promptly arrested for DUI.  Her husband was allowed to drive the car back to their home.
At the Long Beach Police Department, our client submitted to a breath test and her BAC was again 0.11%.
The client was released the following morning after signing a promise to appear in the Long Beach Superior Court in about three months.  Once she was released, she and her husband hired Greg Hill & Associates.
The two described the traffic stop and the field sobriety tests, and the client’s immigration concerns.  She was on a work visa that would be up for renewal in six months and she was concerned that a conviction for DUI might cause her renewal to be rejected.
Greg then got the CHP report and spotted the issue of the prolonged detention of 17 minutes that was far, far longer than the seven minutes the U.S. Supreme Court found to be a Fourth Amendment violation in the 2015 case of Rodriguez v. U.S. Supreme Court (2015) 575 U.S. ___, 135 S. Ct. 1609, 1614, 91 L.Ed.2d 492, 498.  Greg thus prepared a motion to suppress all evidence gathered by the CHP and the Long Beach Police Department after the prolonged detention of seventeen minutes.  Greg felt good about the motion, but had a healthy skepticism that the CHP officer would come to court and take the stand, only to testify that he left a few things out of his report that would undermine the argument that there was a prolonged detention in violation of the Fourth Amendment.  This was a common, but sad, almost predictable occurrence when any case is in jeopardy of being dismissed.
After the motion was filed, the Long Beach District Attorney’s office called to report that they needed more time to respond and possibly a trial continuance because the CHP officer was injured on duty (IOD) and out on medical leave.
Greg declined the request to continue the trial to accommodate the officer and the case proceeded to trial.  Greg was hoping the other CHP officer in the CHP car would not testify to preserve the DUI case.
At the last minute, the DA called Greg and proposed to resolve the case for a wet reckless.
Greg responded that he wanted a dry reckless for his client, with less probation (2 years), a lower fine ($150) and no DUI class as part of the deal (because our client had already finished the AB541 program anyways), so that this conviction would not hurt her work visa renewal process.
The DA agreed.
Our client was very happy with this outcome, as she initially believed a DUI conviction was almost a certainty and possibly being asked to leave the United States, but the case resolved with far less than a DUI and a resolution that included nothing that suggested she was DUI, and with less probation and lower fines (which were zero after her two days in custody were applied).
For more information about dry reckless and prolonged detention issues, please click on the following articles:
Contact us.
Serving Torrance, Long Beach, Compton, Airport Courthouses and Other Courthouses.