Dog Sniff of Car Improper If Driver Driving on the Shoulder

Whenever the U.S. Supreme Court rules in favor of a defendant’s challenge to search and seizure, the opinion receives great applause and compliments by criminal defense attorneys nationwide.

In a Nutshell: The following U.S. Supreme Court case on a prolonged detention of seven to eight minutes being a Fourth Amendment violation is a powerful ruling for motions to suppress evidence in DUI cases and should be well understood by every criminal defense attorney.  We have filed multiple motions to suppress on the basis of this case and won, resulting in dismissal of the case.

The latest decision in Rodriguez v. U.S. Supreme Court (No. 13-9972, April 21, 2015, 2015 DJDAR 4311) is no different.  Our office, however, recommends that all applause be hesitant and short.  At first look, the case looks great, but at closer look, it appears to provide police and prosecutors a road map of how to preserve a search under similar circumstances.

It is important to understand the facts surrounding the traffic stop of Dennys Rodriguez to appreciate the rulings that followed.  Officer Struble of the Valley Police Department in Nebraska was driving along Nebraska State Highway 275 behind Mr. Rodriguez’s Mercury Mountaineer.  He saw the Mountaineer veer slowly onto the shoulder of the road for a second or two and then jerk back onto the road.  It was just past midnight.  Nebraska Revised statute § 60-6,142 prohibits driving on the shoulder of the road. 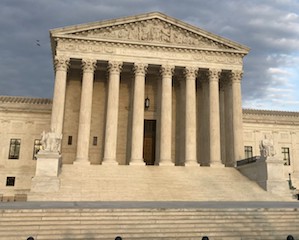 U.S. Supreme Court
On that basis, Officer Struble pulled the Mountaineer over.  Officer Stuble had his K-9 named Floyd in the car
Struble asked Rodriguez why he had driven onto the shoulder.  Rodriguez explained that he did so to avoid a pothole.  Rodriguez then provided his license, registration and proof of insurance.  Officer Struble looked at the documents and then completed a warning ticket for Rodriguez for driving on the shoulder of the road.  Struble then handed the warning to Rodriguez and explained it to him.  In his report, he said he had finished, “I got all the reasons for the stop out of the way.  I took care of all the business.”

Struble, however, then asked Rodriguez for permission to walk his K-9 around the car to do a sniff check of the car.  Rodriguez said no.  At this point, the stop had lasted 20 minutes.

Struble then instructed Rodriguez to turn off the ignition, exit the vehicle and stand in front of the patrol car so Struble could wait for a second officer to come to the scene.  Gonzalez complied.

The second officer arrived about seven or eight minutes later and Struble walked his K-9 around the Mountaineer.  The dog found a “large bag” of methamphetamine and Rodriguez was arrested.

Rodriguez then filed motion to suppress the methamphetamine seized because, he argued, Officer Struble had prolonged the traffic stop without reasonable suspicion in order to conduct the K-9 sniff search.

The trial court judge found no reasonable suspicion for the prolonged traffic stop, but ruled the prolonged stop of “seven to eight minutes” was a “de minimis” intrusion on Rodriguez’s Fourth Amendment rights and was therefore permissible.  The motion was then denied.  Rodriguez then entered a conditional plea and was sentenced to five years in state prison.

Rodriguez then appealed the ruling to the Eighth Circuit, which affirmed the ruling.  It agreed that the seven or eight minute delay was “a de minimis intrusion on Rodriguez’s personal liberty.”

Rodriguez then appealed to the U.S. Supreme Court, which reversed the trial court, ruling in favor of Rodriguez.  Justice Ginsburg ruled that without a reasonable suspicion, any police extension of a traffic stop to conduct a dog sniff violates the Constitution’s “shield” against unreasonable seizures.

In explaining her reasoning, Justice Ginsburg stated that a routine traffic stop is more like a brief stop to stop and frisk under Terry v. Ohio (1968) 392 U.S. 1, 88 S. Ct. 1868, 20 L. Ed. 2d 889., rather than an arrest.  Its tolerable duration is determined by the seizure’s “mission,” which is to address the traffic violation that warranted the stop.  “Authority for the stop ends when tasks tied to the traffic infraction – or reasonably should have been – completed.”  A gratuitous further search (as Struble sought here) is improper, in other words.

This holding is to be celebrated by defense attorneys, but the unique thing about the Rodriguez case is that the officer did not have a reasonable suspicion of other criminal activity.  The officer, for example, did not notice dilated eyes, constricted pupils, nervousness, evasive answers to questions, any unusual smells, etc., to give rise to a reasonable suspicion to continue the traffic stop.

We think the effect of Rodriguez will consequently be limited.  It most likely will not be useful in DUI cases, for example because the report will state that the officer immediately detected the odor of alcohol or slurred speech, or both.  Officers will heed the hints planted in the opinion to be thorough and document everything that can support a reasonable suspicion (to allow a search later).  This will then justify the search that follows and protect the items from a motion to suppress as Rodriguez succeeded with here.
The citation for the U.S. Supreme Court ruling discussed above is Dennys Rodriguez v. United States Supreme Court (2015) 575 U.S. 348, 135 S. Ct. 1609, 191 L. Ed. 2d 492.
For more information about the issues in this case, click on the following articles:
Contact us.