Warrantless Use of Police Dog on Front Porch Improper

There is a general feeling among defense attorneys that the Fourth Amendment has lost almost all viability as law due to the seemingly countless exceptions adopted over time by courts and due to new definitions of what constitutes a search.

The United States Supreme Court, in a March 26, 2013 ruling, Florida v. Jardines, has seemingly put a stop to this eroding right against unreasonable search and seizure.

The case arose out of an unverified tip to the Miami-Dade Police that Joelis Jardines was growing and selling marijuana in his home.  Detective William Pedraja was assigned to the case.

Pedraja drove by Jardines’ house, but saw nothing that indicated criminal activity.  He therefore approached the home with Detective Douglas Bartelt, a police dog handler, with his drug-sniffing dog.  The group then walked up to Jardines’ front porch, at which time the dog indicated the presence of drugs nearby.  The officers did not attempt to knock on Jardines’ door to speak with him.  They did not yell for Jardines’ either. 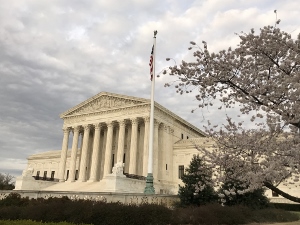 U.S. Supreme Court
Pedraja then left and got a warrant to search the house.  When searching the home, police found marijuana plants.  The State of Florida then charged Jardines with trafficking in cannabis.

At trial, Jardines made a motion to suppress the evidence found through the warrant on grounds that the canine search, which formed the basis of the warrant, violated the Fourth Amendment.  The trial court granted Jardines’ motion and the case was dismissed.

The U.S. Supreme Court began its analysis by noting that the Fourth Amendment guarantees the “right of the people to be secure in their persons, houses, papers, and effects, against unreasonable searches and seizures, shall not be violated.”  The court, then noted that when police search persons, houses, or effects, “a search” within the meaning of the Fourth Amendment occurs.

The Court, speaking through Justice Antonia Scalia, then noted that Jardines had not explicitly or implicitly permitted officers onto his porch.  Moreover, by bringing a trained police dog to explore around the home in hopes of discovering incriminating evidence, police had effected a search.  As there was no warrant, the search could only be defended if some exception applied and here no such exception applied.

Justice Kagan wrote a concurring opinion, wherein she distilled down the issue by analogizing the use of a drug-detention dog here to police walking up onto one’s porch and, without knocking or summoning the homeowner to the front door, using “super-high powered binoculars” to look through one’s walls and inspect the interior of the home.  As such, the use of the police dog was clearly a search and it was unreasonable because it took place from an area protected by the Fourth Amendment.  It was further unreasonable because it was without a warrant.

Our office applauds this decision, but recognizes that its practical effect is really quite limited.  In Los Angeles, Orange, San Bernardino, Riverside and Ventura counties, we rarely see police sniff dogs used, especially in a rather informal manner as the Miami-Dade Police Department did.  Nevertheless, it is greatly welcomed that the marijuana discovered by use of the police sniff dog was not excused as being an inevitable discovery.
The citation for the U.S. Supreme Court ruling discussed above is Florida v. Jardines (2013) 569 U.S. 1, 133 S. Ct. 1409; 185 L. Ed. 2d 495.
For more information about the legality of certain searches, click on the following articles:
Contact Greg Hill & Associates
Serving Torrance, Long Beach, Compton, Airport Courthouses and Other Courthouses.