Kewhan Robey put 450 grams of marijuana in a FedEx box and attempted to mail it from California to Illinois.  A FedEx employee, however, noticed “a strong odor” of marijuana and held the package back.  He then called the Santa Maria Police Department.

Why This Article Matters:  A warrantless search of a Fed Ex package, which a Fed Ex employee notified police about because of a “strong odor,” was held improper because a search warrant should be obtained first, as there were no exigent circumstances that would support an exception to the warrant requirement.

Totorica then seized the package, “as evidence” he said.  He then took the package to the police station and opened it up without a search warrant.

A few days later, Robey went to the FedEx office with his packing slip to ask why his package had not been delivered.  The FedEx employee then telephoned Totorica, who came to the office and arrested Robey.  It was later determined that Robey had used a false name on the packing slip.

Robey was then prosecuted for violation of California Health and Safety Code § 11379 for possession for sale and transportation of marijuana.  Robey filed a motion to suppress the evidence of marijuana, alleging that the police should have secured a search warrant before opening the FedEx package, as there was no exigent circumstances justifying such an immediate opening.  The trial court denied the motion, saying that exigent circumstances did exist and the inevitable discovery doctrine supported the warrantless search.

Before the case proceeded further, Robey filed a petition for writ of mandate to review the ruling on the motion to suppress.  Robey asked the appellate court to reverse the ruling and then direct the trial court to grant the motion.  Such a ruling would mean the prosecution would be left with no evidence to prosecute Robey and the case would be dismissed.

The Second Appellate District, in Robey v. Superior Court (2011) 220 Cal.App.4th 1, agreed with Robey.  In finding the trial court erred, the appellate court noted that in a California Supreme Court case, People v. McKinnon (1972) 7 Cal.3d 899, the officer was allowed to seize the package as he did, but once he seized it, he was required to hold it unopened until he obtained a search warrant, unless there were exigent circumstances.  Exigent circumstances could include the marijuana turning to another substance (which will not happen) or the marijuana evaporating (which also will not happen).

Here, the package was in police custody and control.  There was no exigency.  Marijuana can remain in its molecular form for quite some time, certainly longer than the time to obtain a proper search warrant. 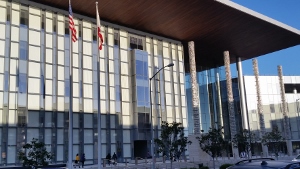 The court also rejected the People’s attempt at arguing a “plain smell” of the package made its contents obvious and therefore, no warrant was necessary, as is the law with the “plain view” doctrine.  The court said a “plain smell” approach was not so objective and would “open the door to snooping and rummaging through a person’s personal effects” to smell something the officer would claim smelled like a drug to justify a warrantless search.

In closing, the court reminded us, “the warrant requirement is not an empty formality.  It is the cornerstone of the Fourth Amendment’s guarantee of the right of privacy” (Johnson v. United States (1948) 333 U.S. 10, 13-14).
Postscript: the prosecutor did not like this ruling at all, so the State of California appealed the Second Appellate District’s ruling to the California Supreme Court in Sacramento.  However, two years later, the state’s supreme court affirmed the appellate court in Robey v. Superior Court (2013) 56 Cal.4th 1218.
While this case should not be viewed as a “how to” instruction of transporting marijuana by Fed Ex, the rulings it resulted in should be celebrated as showing the Fourth Amendment requirement for a warrant remains strong in some contexts.

For more information about arrest issues in general, click on the following articles:
For summaries of some of the drug cases we have handled, view our case summaries for select drug offenses.