Our client, who was late to work, was driving through Downtown Long Beach.  He ran a red light and, as was his luck that day, was pulled over almost immediately.

In 50 Words or Less:  Long Beach - client stopped for running red light (VC 21451(a)), but then police discover he has suspended license (VC 14601); client then goes to DMV and gets license; case resolved for infraction

The police officer noticed that our client, age 39, had no insurance, a suspended driver’s license due to failing to pay a prior traffic ticket - and that his vehicle registration had expired.  The police officer, however, only wrote on the ticket that our client had run a red light, an infraction, and was driving on a suspended driver’s license.
The client left the scene feeling lucky that he had not been cited for not having insurance(a violation of Vehicle Code § 16029)  and not having current vehicle registration (Vehicle Code § 4000 (a)).
He felt his luck may have been illusory because the police officer seemed to have written down the other violations, but just not on the ticket.  Our client knew the prosecutor could charge all four violations and that he might be looking at some steep fines and at least one misdemeanor, meaning he would be placed on summary probation, which would mean he would lose the job he ironically was late to the morning of the ticket.
The client had a prior criminal history, so he was well aware of what could happen and that the ticket itself was not necessarily a limit of his exposure.
When the day for the arraignment came, the client failed to appear.  He said he was too scared and that he could not miss work.  Therefore, there was a bench warrant issued for his arrest.
The client consequently called Greg Hill & Associates and explained his concerns.  Greg listened to the client and advised him to first and foremost, get his driver’s license current, which necessarily meant he needed to also get insurance and pay the outstanding ticket that caused his license to be suspended.  He also advised the client to register his vehicle.
The client then did all these things.  This was quite expensive to him and time consuming, but he was concerned about losing his job and not being able to provide for his family.  The client then gave Greg a color photocopy of this new, current driver’s license, his current vehicle registration and his current insurance card.
Greg Hill then appeared in the Long Beach Superior Court to recall the bench warrant, nervous that the complaint against the client would allege four violations.  Luckily, the complaint only alleged the red light violation and the driving on a suspended driver’s license.  However, the police report noted the lack of insurance and the expired vehicle registration issues. 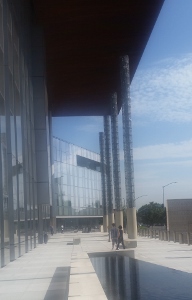 Governor George Deukmejian Courthouse in Long Beach
The young Long Beach City Prosecutor had read the police report and was feisty about the case.  She thought her supervisor had failed to fully charge our client for all the violations, so her offer was rather tough: one year of summary probation, a $300 fine and 10 days of community service – even after Greg showed the young lady the client’s documents showing he had fixed each of the things (less the traffic light violation).  The offer was firm, she said, because the client had failed to appear at his arraignment, too.
Greg therefore asked the judge to approach and off the record, explained the facts of the case and that the client had fixed each deficiency.  The judge patiently listened and then looked at the prosecutor, asking her, “well, I assume you will just let defendant plead to the infraction and set a $90 fine?”  The prosecutor, sensing the strong hint from the judge, sheepishly agreed.
Greg then accepted this resolution, much to the smirking of the City Prosecutor.
The client was happy that his luck had continued all the way to the end.  He avoided any form of probation because the matter was resolved as an infraction.  The misdemeanor charge of driving without a valid driver’s license was dismissed.

For more information about driving on a suspended license and an infraction, click on the following articles:
Contact us.
Serving Torrance, Long Beach, Compton, Airport Courthouses and Other Courthouses.