Our client, age 47, was driving home from a sports bar in Inglewood. He had been drinking, but felt safe to drive. As he pulled out of the bar’s parking lot, he noticed a woman who he had chatted with earlier in the bar. He pulled alongside her in his new car, rolled down the window and began talking to her.

In 50 Words or Less:  Client arrested in Inglewood after pausing in his car to talk to woman on sidewalk, 0.10% BAC, resolved for wet reckless, 24 months summary probation and $250 fine, plus penalties and assessments.

A CHP Officer on the city streets of Inglewood (Nutwood Avenue) saw our client slow down. The officer claimed our client came to a full stop “for seven seconds.” The officer promptly pulled over our client, noting also that the car only had a dealer paper license plate.

The officer seemed to be in a rush and indeed was. After just twelve minutes, he administered the preliminary alcohol screening (PAS) test on our client. Under Title 17, section 1219.3 of the California Code, such a test must follow fifteen minutes of continuous observation of the suspect by the officer administering the test. This is to ensure the subject does not vomit, smoke, burp, eat or otherwise foul the quality of air that will be expelled to the breath testing device. This certainly had been violated.

Moreover, the client advised the officers that he regularly used an asthma inhaler. He took out his inhaler from his pocket to show officers at the scene. Even with such an important piece of information, the officer failed to ask our client when he last used the inhaler.

As published in the British Medical Journal 756 (March, 2002), “Using Asthma Inhalers Can Give False Positive Results in Breath Tests,” research indicates that ingredients in asthma inhalers may elevate breath alcohol levels after dosage. This is because asthma inhalers sometimes contain 30 percent or more alcohol that isn't absorbed into the bloodstream but is used as a propellant for the medicine. Albuterol, the active ingredient in many asthma inhalers, also contains a methyl group and can trigger a false positive reading from a breath alcohol analyzer even when the subject being tested drank no alcohol at all.

The officer was too rushed to even then sign the PAS certification on the DS-367, one of the forms that must be submitted to the DMV following an arrest for a DUI.

The client then passed two of the three field sobriety tests that the National Highway Traffic Safety Administration (NHTSA) consider reliable as probative of impairment by alcohol. In each of these two tests, the CHP officer noted that our client exhibited just one indicia of impairment when two such indicators are required by the NHTSA to fail the test.

The client was then arrested. At the police station he submitted to a breath test where he registered a 0.10% blood alcohol content (BAC).

The client called Greg Hill & Associates in a panic. It was his first DUI and, while he did have a minor prior criminal history, he had no convictions for alcohol-related offenses.

Greg met with the client on a Sunday afternoon and answered the client’s many questions. Greg then appeared in Inglewood Superior Court and discussed the case at length with the prosecutor there. Greg discussed the problems with the PAS test and the field sobriety test results.

The prosecutor appreciated the issues and how a jury might find the traffic stop improper and then the client’s arrest improper, despite the BAC that was later measured. However, the prosecutor was unwilling to amend the complaint to allege a reckless driving charge or anything else. 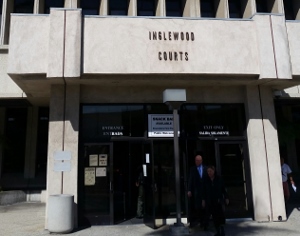 Inglewood Superior Courthouse
However, on the second court appearance, the prosecutor advised Greg that he had discussed the facts and issues with his supervisor, who had agreed to amend the complaint to allege a reckless driving charge (a “wet reckless,” Vehicle Code § 23103 pursuant to § 23103.5).

The client was happy with this development and agreed to accept the plea bargain, happy to avoid the ignition interlock device (IID) requirement that would be imposed by the DMV if he had been convicted of DUI.