Our client, age 21, was returning from a night of drinking with his friends.  It was about 2:30 a.m. on a Saturday morning.  He liked to drive fast in his old Honda Civic, “tricked out” with low-profile tires on big rims, a “whale tail” spoiler and a modified exhaust system.  He was navigating a turn on La Cienega and went a bit too fast, going up on the curb and smashing into a bus-stop bench, which in turn was dislodged and broke through a low concrete wall surrounding an auto body shop.
Our client knew his blood alcohol level was above the legal limit, so he left the scene immediately because he feared being arrested for DUI.  He was also quite upset about damaging his car and wanted to get it fixed ASAP.
The next day, our client took an Uber back down La Cienega to survey the damage.  He had no idea the damage to the bus stop and the nearby wall was so extensive.
The following day, a police detective from the Los Angeles Police Department called him and left a message. 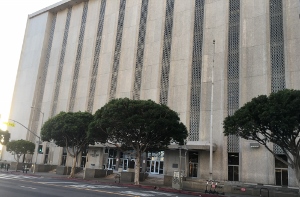 Metro Courthouse
Instead of calling back the detective, the client called Greg Hill & Associates and asked what to do, as he had been defended in a prior underage possession of alcohol case a few years earlier that Greg managed to have dismissed.  The client was amazed that someone had apparently seen the crash and reported the license plate number of his car, leading to the phone call to him.
Greg explained to the client the law on misdemeanor hit and run, Vehicle Code § 20002.  Greg explained the obligation to leave one’s identifying information at the scene of the accident even if no one was present or to seek out the owner of the property damaged before leaving.  Greg explained a few cases he had worked on previously with similar facts and how they were resolved.  The client’s main concern was serving time in jail, which Greg thought would not happen and told the client so.
Greg advised the client not to speak to the detective at all and to let Greg call the City of Los Angeles about paying for the repairs to the bus stop.  Greg also returned the phone call to the police detective and advised the police officer that our client was represented by counsel and would only speak to police with our office present.
Greg’s phone calls to the City of Los Angeles led to being directed to an advertising company that owned the bus stop bench and which paid for advertising on the bus stop kiosk nearby.  Greg left multiple messages about how our client wished to pay for the damage to the bus stop bench, but needed to know the cost of repairing the bench or simply replacing it if necessary.
Greg’s calls were directed to a third-party claim administrator who dealt with such losses, as it was apparently quite common for such benches to be damaged.  The advertising company apparently owned hundreds.  However, it never provided Greg with a dollar figure to pay for the client’s damages to the bench.
Greg also contacted the auto repair shop whose cinder wall had been damaged and asked for a dollar amount in repair expenses to pay.  The auto repair shop never called back our office with such an answer either.  Greg also faxed the auto shop a letter requesting that it contact us to discuss payment for the damaged wall.
The client then received a notice in the mail from the Los Angeles City Attorney’s Office that a criminal complaint against him had been filed in the Los Angeles Metropolitan Courthouse at 1845 South Hill Street in Los Angeles.  It stated a date to appear in court no later than.  The client forwarded this letter to Greg and the two then discussed what an arraignment is, what would most likely take place and Greg’s likely plea bargain to propose.
Greg then appeared in the Metropolitan Courthouse on the client’s behalf on the designated date only to find out that no case had been filed.  Greg double-checked this with the Los Angeles City Attorney’s Office on the fifth floor of the courthouse and it was confirmed that no case was filed yet.
However, about two months later, the client received a second notice of a case being filed for the same offense, Vehicle Code § 20002, and again forwarded the document to Greg.  Greg again appeared on the client’s behalf in the Metropolitan Courthouse, but again, no case had been filed.
Greg explained to the client that if the case was not filed within a few more weeks, the statute of limitations of one year would pass for such a case, meaning a criminal case was time-barred from being prosecuted.  The client and Greg then nervously waited for a third such letter, but it never came and the statute of limitations expired.  The client was very happy with Greg’s help throughout.
For more information about hit and run, please click on the following articles:
Contact us.