In 1998, when our client was just 23, he was involved in a fight in Hermosa Beach and resolved the case as fighting in public (Penal Code § 415(1) as an infraction).  He had to pay $270 in court fees and $1,173 in restitution to the victim in medical costs.
In 2007, at age 32, he then was convicted of DUI, again in Hermosa Beach.  He was placed on thirty-six months of summary probation, conditioned on his payment of $1,565 in court fees, completion of the AB541 alcohol awareness program and payment of $1,000 in restitution to the City of Hermosa Beach (he ran into city property).  He paid the court fees and completed the AB541 alcohol awareness program, but never paid the $1,000 to the City of Hermosa Beach.  He completely overlooked it.
Fast forward to 2018 and the client is let go from his two jobs, both in the beverage industry, due to his criminal history.  He is married and has a baby due in two months.  He needs to get a job (or two!).  He calls Greg Hill & Associates to ask if his two convictions can be expunged. 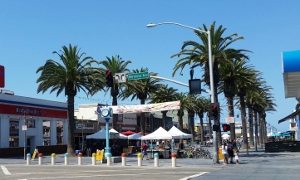 Greg gets the docket reports on each case and tells the client that his infraction for fighting in public is eligible under Penal Code § 1203.4a, but the DUI is ineligible since the client did not successfully complete all the terms of probation.
However, Greg advises the client that he will ask the Redondo Beach City Prosecutor, who handles the cases involving Hermosa Beach and Redondo Beach, if our client can pay the $1,000 to the City of Hermosa Beach, although late, in order to have the conviction expunged and whether she will oppose the petition for dismissal.  She graciously agrees to accept the late payment and not oppose the petition.
Greg relays this information to the client, who then makes the $1,000 payment.
Greg Hill & Associates then prepares both petitions for dismissal, files each and serves each to the Redondo Beach City Prosecutor.  However, since the standards for relief differ for expungement of an infraction and expungement of a misdemeanor, the sequence (timing) in which the hearings are held can be critical.  This was especially so since the hearings for each in our client’s case were set for the same day.
Under Penal Code § 1203.4a, the petitioner must wait one year after the date of the conviction for the infraction.  Then, he or she must show that he or she has fully complied with and “performed the sentence of the court and is not charged with the commission of any crime, and has, since the pronouncement of judgment, lived an honest and upright life and has conformed to and obeyed the laws of the land.”
Here, since our client was convicted of DUI after the infraction, it was necessary for our office to have the DUI conviction expunged first so that when the other judge ruled under 1203.4a, the judge could not consider the DUI conviction evidence that our client disobeyed “the laws of the land.”
Accordingly, Greg first went to the courtroom for the hearing on the 1203.4 expungement of the DUI.  The judge granted this.  Greg then walked down the Torrance court hallway to the other courtroom for the hearing on the infraction expungement under 1203.4a.
Luckily, the prosecutor handling the infraction expungement hearing was not even aware of our client having a DUI conviction after the infraction.  The judge hearing the petition for dismissal of the infraction conviction also granted the petition.
The client was very happy with this outcome and in fact, on the day of the two rulings, his wife gave birth to a healthy baby girl.
For more information about expungement, please click on the following articles:
Contact us.
Serving Torrance, Long Beach, Compton, Airport Courthouses and Other Courthouses.