As is common with so many cases arising from Hermosa Beach, this case began with our client agreeing to meet some friends at a bar in Hermosa Beach to watch a sporting event together and enjoy a few drinks.
Our client’s bar of choice was the Underground, where he met some of his friends from Nigeria who were avid English Premier League soccer fans.  Our client, age 31, has studied computers in London after growing up in Nigeria.  He then got a job working as a computer technician at a local college in Los Angeles and discovered Hermosa Beach.
In this particular evening, a Hermosa Beach police officer discovered our client urinating behind a trash dumpster.  He was asked if he knew public urination was illegal and he replied that he did know this.  He then provided the officer with his identification and the officer wrote out a ticket for public urination, a violation of Penal Code § 372.  The officer also offered the client hand sanitizer.
Our client signed a promise to appear in the Torrance Superior Court in about six weeks and was then released on his own recognizance. 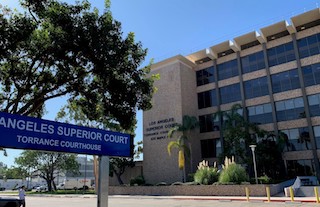 Torrance Court
The client later called Greg Hill & Associates and spoke with Greg about the ticket.  The client had done a bit of research on the Internet about Penal Code § 372 and how he could face up to six months in county jail.  This caused him quite a bit of anxiety, so he decided to retain an attorney to resolve the case on the best terms possible.
The client retained Greg Hill & Associates.  Greg appeared on the client’s behalf and was able to have the complaint amended to allege an infraction-level violation for violation of Penal Code § 415(2), “disturbing the peace by making a loud noise,” after the client attended ten Alcoholics Anonymous (AA) meetings and made a $550 “donation” to the Hermosa Beach Nuisance Abatement Fund.
The client was very happy to avoid a misdemeanor conviction on his record.
A year or so after the conviction, Greg contacted the client again to ask if the client was interested in having the conviction for the infraction expunged.
The client responded that he was very interested in this because he was applying to enlist in the U.S. Army and anything he could do to make himself more competitive was helpful.  He was actually quite far along in the enlistment process, but his recruiter had told him that an infraction could not be expunged.
Greg’s email challenged our client’s understanding, so he called Greg and Greg explained that the recruiter was correct, until about five years ago, when the law changed to allow expungement of an infraction.  Greg explained how he had successfully sought expungement of convictions for infractions in perhaps fifty cases over the last five years.
Greg further explained that expungement did not remove or delete the record of the case being filed, but changed the case’s final ruling to dismissed and returned the final plea back to not guilty.  It also allowed the client to be able to say he or she was not convicted of the crime, except in certain situations, one of which included our client applying for a job with the Army, as it was the federal government.
Greg also explained how the legal standard for expungement of an infraction required that the client lead “an honest and upright life.”  This standard was somewhat counterintuitive when compared to the legal standard for expungement of a felony or a misdemeanor, neither of which required such a showing.  However, a judge could order expungement of an infraction just one year after the conviction, whereas with a misdemeanor or felony, one must finish probation successfully first, which usually means at least three years after the conviction (unless probation is terminated early).
The client then hired Greg Hill & Associates to file the petition for dismissal of his infraction, which our office promptly did.
The Torrance judge handling the petition granted the petition, which our client greatly appreciated for his enlistment to the Army.
For more information about the issues in this case, please click on the following articles:
Contact us.
Serving Torrance, Long Beach, Compton, Airport Courthouses and Other Courthouses.