Our client, age 29, had served in the U.S. Navy from 2010 to 2017 as an avionics technician on an aircraft carrier.  He worked on F/A-18D Hornets, S-3 Vikings and even EA-6B Prowlers, so when he called Greg Hill & Associates, Greg and the client had an instant bond because Greg flew over 1,000 hours in the EA-6B.
The client explained how he had been in downtown Hermosa Beach and was drinking quite heavily before he decided to drive home.  As he was driving his Ford Fiesta home, he ran into a parked car on Hermosa Avenue and broke his nose from his airbag hitting him so hard.  The details were vague to him, but he described how he had been bleeding quite a lot from his nose and was taken to the hospital for treatment.
The client did not know his blood alcohol content (BAC), but knew it was pretty high.  He had no prior convictions for any crime.
The client had called several other attorneys, but Greg was the only one to mention resolving the case through military diversion under Penal Code § 1001.80.  Greg explained the requirements that a judge must find before allowing such diversion, which allows the client to avoid a conviction and have the case dismissed.
There are four basic requirements: 1) that the person is an active duty or former active duty serviceman; 2) that the person suffers from a service-related mental condition such as PTSD, traumatic brain injury, substance abuse, an anxiety disorder or some other mental health problem from military service; 3) that the person waives his right to a speedy trial so that he or she can be part of the diversion program; and 4) that the service member take part in a program of mental health counseling to treat his or her service-related condition. 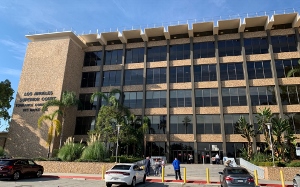 Torrance Courthouse
Military diversion can last up to two years.  Upon completion of the program, the person’s record is ordered sealed and destroyed.
Greg further described how there is no strict nexus requirement between the mental health condition and the commission of the crime as there is in other programs such as the court’s new mental health diversion program under 1001.36.
The client then gave Greg his DD-214 to document his military service and, perhaps not so coincidentally, our client had been already receiving treatment through the Long Beach VA for alcohol abuse, something he began doing while in the military before he was discharged two years ago.
Greg then went to the Torrance Superior Court on the day for the arraignment, bringing with him the client’s DD-214, his proof of treatment in the Long Beach VA already and proof of attending AA meetings, as Greg suggested just because judges do have discretion to deny such a request for military diversion.
Greg read the police report for the first time once getting to court.  It was not pretty.  Our client had a 0.24% BAC.  According to the police officer writing the report, our client stated, “I drank too much” over and over.
Greg then approached the Redondo Beach City Prosecutor handling the case to advise her that our client was a U.S. Navy veteran and we’d be asking the judge to impose military diversion under Penal Code § 1001.80.  We showed the prosecutor the client’s DD-214 to show his military service and we provided a letter from the Long Beach Veteran’s Administration showing he was receiving treatment for an alcohol abuse syndrome.
The prosecutor agreed that it certainly appeared he was eligible for such a program, so Greg proceeded to discussing terms for the diversion that the judge could impose.  Due to the client’s BAC being above 0.15%, the nine-month alcohol awareness program (AB1353) seemed appropriate, but otherwise, it did not seem the client needed to attend MADD or the HAM program because he ought to continue treatment through the VA in Long Beach.
The client would also have to pay the City of Hermosa Beach booking fee and restitution in any amounts the victim sought above insurance payments received.
The judge then called the matter and Greg asked to approach with the prosecutor.  Greg then made an oral motion for imposition of military diversion under Penal Code 1001.80 and showed the judge the documentation mentioned above.  The judge agreed that our client seemed eligible for military diversion and then moved onto the terms, agreeing with all terms Greg and the prosecutor had discussed, but adding an obligation for our client to attend the Mothers Against Drunk Driving (MADD) victim impact panel.
The term of diversion would be two years.
Greg returned to the office and described the judge’s order allowing military diversion.  This was something of a windfall for our client because there was no conviction, so his fees and fines were zero and no order to install the IID was triggered by a conviction.
For more information about military diversion and DUI in general, please click on the following articles:
Contact us.