Our client, age 35, had been out to dinner and for drinks with a few friends in Hermosa Beach. 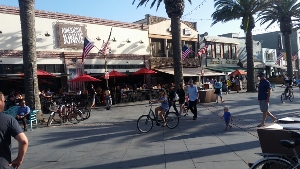 He had a job which required him to frequently travel to Canada. Canada has a policy of not allowing Americans to rent cars if they have a conviction for DUI within a certain period, so after our client was arrested for DUI, he was especially keen to have his case resolved as anything other than a DUI.

Our client had a friend who had a DUI and had to obtain a Temporary Residence Permit to travel about in Canada. His friend described to our client all the paperwork he had to go through, even though it can be done once one gets to Canada. However, if one is going to Canada for work, it would be tremendously preferable to have it all arranged prior to arriving in Canada and hoping to secure such a permit before leaving the United States (imagine if it was denied once one arrived in Canada!). Our client thus looked hopefully to Greg Hill & Associates to help him avoid such a nightmare.

Without All the Details, What Happened?:  Hermosa Beach, speeding past police station with a 0.16% BAC, resolved as a wet reckless.

This was a tall order with our client having a blood alcohol content (BAC) of 0.16%, or double the legal limit. However, there were certain facts in the police report that apparently caused concern with the prosecution taking the case before a jury.

The police officers who made the traffic stop claimed our client was speeding along a section of Valley Avenue in Hermosa Beach that has stop signs about every fifty yards, making it very difficult to speed as officers claimed. In fact, such stop signs were placed so close to each other along that section to slow down traffic because of an elementary school in the vicinity.

For example, the officer claimed our client was going 50 miles per hour, but to do so, one would have to have a high-performance car capable of rapid acceleration and then the car would need to skid to a stop at each stop sign. Our client, however, was not driving any type of car even close to this. He was driving a 1992 Volkswagen Jetta that had seen better days. The pavement was also wet from heavy fog, meaning even if his Jetta could have accelerated as fast as it would have had to match the officer’s report, the Jetta would have probably screeched its tires in such a display of acceleration.

The first test, in fact, was fourteen minutes after officers first observed our client driving. He was stopped two minutes later. Fifteen minutes of continuous observation is required under Title 17, section 1219.3, of the California Code of Regulations, as well as the manufacturer guidelines of all such devices. This requirement was violated.

The blood test that followed was marred by absolutely no documentation showing any chain of custody, no test tube labels showing the vial belonged to our client, no envelope notation indicating the vial within contained blood from our client and there was no Evidence Code § 712 declaration from the phlebologist who received and later tested the blood.

The Hermosa Beach City Prosecutor considered all these issues that Greg explained to him. He then reluctantly agreed to allow our client to plea to a violation of Vehicle Code § 23103, pursuant to 23103.5 (a “wet reckless”). Our client had to attend 52 AA classes and otherwise fulfill all requirements normally associated with a DUI, but the charges related to DUI were dismissed.

This was very satisfactory to our client, as he was able to preserve his ability to travel in Canada for work.

For more information about a wet reckless, traveling to Canada after a DUI conviction and evidence issues in DUI cases, click on the following articles: