Our client, age 38, had been drinking at his house while watching a boxing match on pay-per-view television. He decided to go to the store to buy some food. 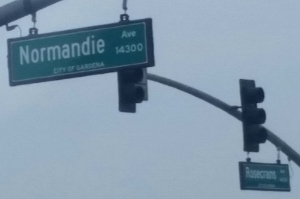 Our client therefore swerved around the braking car and proceeded through the intersection. Unbeknownst to him, a car travelling in the opposite direction saw the braking car and initiated a left turn, southbound on Normandie, to cross in front of our client.

Our client had no choice but to slam on his brakes and brace for impact.

The force of the collision caused the left-turning car to flip over several times and our client’s car to deflect into a center-median light pole. Our client’s intoxication level probably had no role in causing the collision. Had he been completely sober, in other words, the collision still would have occurred due to the “Perfect Storm” of two poor decisions by other motorists.

Our client was surprisingly not injured at all, except shaken up. He got out of his car and immediately attended to the other driver, who explained he was OK, too, except for a few bruises. The driver who caused the entire accident left the scene.

Police arrived and found our client sitting on the curb. They immediately detected the odor of alcohol. Our client also had an open bottle of vodka in his car, which police quickly found.

Police called an ambulance for our client, who insisted he was fine. The ambulance arrived, however, and took our client away. Four and a half hours after the collision, police came to the hospital and instructed the hospital staff to take a blood sample from our client.

Amazingly, the hospital then allowed our client to leave the hospital, unaware that another driver was injured. His wife picked him up.

Our client had a prior DUI with an accident from out of state from seven years earlier, so the client was aware that with an injury causing accident (despite the macho claims of the other driver of no injuries), he would need an attorney.

He called Greg Hill & Associates and immediately spoke with Greg Hill. Greg met with the client on a Saturday afternoon and explained he was amazed that police did not set bail and hold him. Greg listened to the facts of the case and noted that the client would be smart to immediately begin attending two to three Alcoholics Anonymous meetings per week and to document this.

Greg explained that this small act may make a huge difference later in sentencing if the police report did not bode well for him or if his blood alcohol content (BAC) was above 0.08%, even after 4.5 hours had passed after the accident. Greg explained how under Vehicle Code § 23153(b), one’s BAC measured within three hours of driving could be used by the prosecution as the BAC when driving, but if the BAC was taken outside the three hour window, it could not be used to charge one with violating 23153(b).

As it turned out, the client’s BAC came back at an improbable 0.33%, which meant his BAC at the time of driving may have been well over 0.40%! Greg suspected that the blood may have been contaminated or not properly stored by the police, so he had it retested at a private laboratory. However, it came back 0.33% again.

The Torrance prosecutor handling the case made an offer of two years in state prison for our client, which was obviously a shock to our client because he had a job, a family, a young daughter and a wife.

Greg wrote a Defense Position Letter to the district attorney, seeking a probationary sentence because the facts of the case suggested alcohol played no role in the collision (even though the police simplistically labeled our client the primary collision factor) and citing to the client’s attendance of over six months of AA classes (over 75 total) and his family obligations.

The prosecutor’s supervisor reviewed the letter and changed the plea bargain offered to 60 days of county jail with five years of formal probation, including the SB38 alcohol awareness program, payment of a $500 fine plus penalties and assessments and attendance at a Mothers Against Drunk Driving Victim Impact Panel seminar.

The client was extremely happy with the offer, which the district attorney said would not have been made but for the client’s attendance at AA immediately beginning after the accident.