Our client, age 21, was arrested after a California Highway Patrol supposedly witnessed him traveling 88 miles per hour in a 55 mile per hour zone along the 405 Freeway in Fountain Valley. The officer also claimed that our client was swerving all over the road. 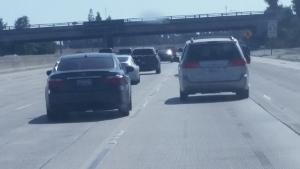 Upon being pulled over, our client was allegedly uncooperative with the CHP officer, although he did consent to a PAS (Preliminary Alcohol Screening) test at the roadside area where he was pulled over. On this test, which was done after the police officer observed our client for less than the required fifteen minutes, his breath apparently showed a 0.12% blood alcohol content (BAC).

Under Section 1219.3 of Title 17 of the California Code and Sandra Molenda v. DMV (2009) 172 Cal.App.4th 974, this test cannot be performed until the officer has observed the subject for fifteen continuous minutes to ensure the breath sample is not contaminated by vomit, smoking or drinking of any sort by the subject of the test. The manufacturer of the PAS device also recommends that no test be administered until the subject is continuously observed for fifteen minutes prior to the test for the same reasons stated in 1219.3.

Our client also opted to have his blood tested, so the CHP officer took our client to the Orange County Jail, where our client provided a blood sample.

In a Nutshell:  In the following DUI summary, our client avoided a sixty-day minimum sentence enhancement for, while DUI, driving more than 30 miles per hour above the speed limit on a highway under Vehicle Code § 23582. This happened largely because our office steered the analysis toward the chain of custody of the blood sample.

Despite clear required protocol requiring a documented chain of custody for the blood sample (see Bullcoming v. New Mexico (2011) 131 S. Ct. 2705), the Orange County Crime lab failed to show the sample’s whereabouts from the time the sample was given until the time it was tested several days later.

Section 1219.1 of Title 17 of the California Code of Regulations states that, "[s]amples taken for forensic alcohol analysis and breath alcohol analysis shall be collected and handled in a manner approved by the Department. The identity and integrity of the [California DUI blood] samples shall be maintained through collection to analysis and reporting." Title 17 includes in its appendix a sample chain of custody that many Orange County police agencies have incorporated into their blood sample handling protocol.

The Westminster District Attorney handling this case wanted to enhance the punishment for our client because of the speeding and swerving circumstances. The initial offer was way beyond the statutory minimums normally offered to a first time DUI. His proposed plea bargain was three years of informal, or summary, probation, contingent upon our client serving 90 days in the Orange County jail, completion of the AB762 (six month) alcohol awareness program, attendance at the Mothers Against Drunk Driving (MADD) Victim Impact Panel, payment of a $500 fine, plus penalties and assessments (total would be approximately $2,500, less credit of $30 off the base fine, or less about $150) and providing a DNA sample. The DA said he wanted “to send a message to this kid.”

The only message sent, however, was to Greg Hill. The message was loud and clear that this prosecutor was not viewing this case normally.

After several appearances in the Westminster court and a letter to the young DA’s supervisor concerning the case, the DA agreed to reduce his offer to the minimum offer for an uneventful, cooperative, first-time DUI. Our client accepted. This offer included a three-month DUI class, a $390 fine, plus penalties and assessments and attendance at one session of MADD, as well as being on summary probation for 36 months. No jail was part of the offer.

For more information about what are the differences between a first-time DUI and a wet reckless, as well as why a chain of custody for the blood is important, click on the following articles: