Our client, age 28, was arrested for felony possession of concentrated marijuana under Health and Safety Code § 11357(a).  This took place in Inglewood.  He went to court at the Inglewood Superior Court and immediately entered into a plea bargain at the arraignment, upon the urging of a public defender. 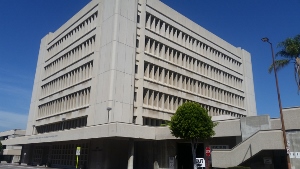 Inglewood Superior Courthouse
The terms of the plea bargain seemed attractive because he avoided prison (which would have been served in county jail under AB 109 as it was a non-violent and non-serious crime and our client was not a registered sex offender).  However, he had to pay court fines and attend 52 narcotics anonymous meetings, but did not do either.  After approximately one year without doing so, he faced a bench warrant from the judge.  His probation was also revoked due to this violation of the terms of probation.

Summary:  Client with a conviction out of the Inglewood courthouse for felony possession of concentrated cannabis has the conviction reduced to a misdemeanor under Prop 64 and then expunged.

Our client became aware of this on a routine traffic stop when the police officer told our client about this and assigned him a date to appear in court to address the warrant.
The client appeared as assigned and the judge remanded him to convert the remainder of his probation obligations to county time (20 days), but then was reinstated on probation for the remaining two years.

The client successfully completed the terms of probation and years later, at age 33, found himself laid off from a good job with a Fortune-500 company.  He applied for several jobs, but was repeatedly told that the employer wanted to hire him, but could not because of his felony record.

He called up Greg Hill & Associates and asked if there was anything we could do to help him.

Greg first explained that Prop 64 allowed certain felony marijuana charges to be brought as misdemeanors and that Health and Safety Code § 11357 was included.  Therefore, the client could request reduction of the conviction from a felony to a misdemeanor under Prop 64 alone.

Greg next explained how Prop 47 allowed resentencing on several types of lower level felony drug possession charges such as Health and Safety Code § 11357(a) to be misdemeanors, as long as the defendant did not have a prior “Super Strike” (i.e. a conviction for murder, rape, mayhem, etc.) and was not a registered sex offender under Penal Code § 290.  As the defendant was not a registered sex offender and did not have a “Super Strike” conviction, Prop 47 seemed to be one way to request reduction of the felony to a misdemeanor.

Greg further explained that Penal Code § 17(b) could also be invoked to request that the judge resentence the felony as a misdemeanor, as 11357(a) is a “wobbler,” meaning it could be filed as a felony or a misdemeanor.

Lastly, Greg explained that under Penal Code § 1203.4, the judge could also dismiss the case and change his prior plea of “no contest” to “not guilty.”  Greg explained that this process was known as expungement and its primary benefit was for those seeking employment insofar as if a court granted a petition under § 1203.4, the petitioner could lawfully answer no to any query of whether he or she had suffered the conviction at issue.

The Client agreed to retain Greg Hill & Associates to file a petition for dismissal under Penal Code § 1203.4 with a request for reduction of the felony conviction to a misdemeanor under Penal Code § 17(b), Prop 47 and Prop 64 and our office did so with the Torrance Superior Court, where his case was transferred (from Inglewood)) for monitoring probation.

The judge in the Torrance Superior Court granted the motion, remarking “I think you hit every button on this one.”  The client was extremely happy with this result, as he could truthfully say he was no longer a convicted felon.

For more information about probation modification and 17(b) / Prop 47 issues, please click on the following articles:
Contact us.
Serving Torrance, Long Beach, Compton, Airport Courthouses and Other Courthouses.