When our client was 28 years old, she and some of her friends went out to Hermosa Beach for a “girls night out.”  The group included many of our client’s friends from college.  They wanted to catch up on gossip and talk about their job situations, marriages and, some, their divorces.  Our client had graduated from a University of California university and was upwardly mobile.
The group went to several bars, having one drink at each before moving along to another one and repeating the process.  Once they got to Patrick Molloy’s, they decided to stay and have several drinks there.  They like the atmosphere best of the places they had been to earlier.
They stayed there until it closed at 2:00 a.m.  The client contacted Uber and instructed the driver to pick her near the intersection of Pier Plaza and Hermosa Avenue.  Several of the other girls did the same thing.  As they were walking from Patrick Molloy’s toward the Uber pickup spot, our client realized she needed to pee. 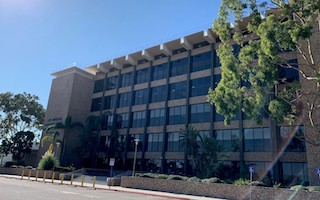 Torrance Courthouse
Our client knew she could not go back to the bar, as it was closed, so she spotted a parked car and decided to simply squat behind it and relieve herself.  It seemed like the only thing she could do at that time of night / early morning.
After she did so, a uniformed Hermosa Beach Police Department officer approached her and issued her a ticket for violating Penal Code § 372 (“public nuisance”).  Our client was extremely embarrassed and quickly signed the promise to appear in the Torrance Courthouse in a few weeks.
She returned home and looked over the ticket with some concern.  The letter “M” was circled and she realized that indicated the crime level was a misdemeanor.  She was working for a Fortune 500 company and this worried her.  Would she lose her job if convicted of a misdemeanor?  Was there anything she could to fight the ticket?
She called Greg Hill & Associates and spoke to Greg Hill.  Greg listened to the client explain what had happened.  Greg then described how he had handled such matters in the past and how the Redondo Beach City Prosecutors had resolved such cases with Greg’s clients.  Greg explained how most such cases had been reduced to an infraction and how an infraction differs from a misdemeanor.
Greg recommended that the client attend ten Alcoholics Anonymous (AA) meetings before the arraignment date and give Greg the AA sign-in log showing such attendance so he could show this document to the Redondo Beach City Prosecutor.
The client then attended ten such meetings and Greg took the meeting log to court on the date set for the arraignment.  The Redondo Beach City Prosecutor kindly did allow our client the opportunity to “earn an infraction” for violating Penal Code § 415(2), disturbing the peace by making a loud noise, if she made a $550 contribution to the Hermosa Beach nuisance abatement fund.  The client then did so and the case was resolved for an infraction.
Fast forward a year and the client was still working for a Fortune 500 company as a technical recruiter.  She was driving over 90 minutes to and from work each day and growing tired of the long commute.  She wanted to apply for a new job that did not require such a long commute, but she was concerned that her criminal history might interfere with her getting a new job.
She reached out to Greg Hill and asked if she could have her infraction expunged and Greg explained that this indeed was possible.  Greg also explained how the legal standard required that the applicant lead “an upright life” so the petition would need to include a short declaration from her concerning her life activities over the last year.
Greg then prepared the petition for dismissal of the infraction, including a declaration from the client.  Greg then filed it with the Torrance Superior Court and served the Redondo Beach City Prosecutor.
The judge presiding over the hearing on the petition granted the petition, which made the client very happy because she was eager to apply for a new job closer to home.
For more information about expungement, please click on the following articles:
Contact us.