Our client was twenty-three years old in 1994.  She had been stopped and ticketed with a misdemeanor for driving on a suspended license (Vehicle Code § 14601.1(a)) and driving a car with expired registration (Vehicle Code § 4000).  She explained to the police officer that she had been too busy to renew her driver’s license or her registration.
She then signed a promise to appear in court in about six weeks – and because she was too busy in six weeks – did not show up in court and a bench warrant was issued for her.
As her luck would have it, the same officer who originally ticketed her for expired registration and driving without a valid license saw her again and pulled her over again because he noticed that the car’s license plate still had expired registration, as the tags were old.
This time, the officer arrested our client, taking her to the Long Beach City Jail.  Her car was then towed.  Two days later, our client was taken before a judge, who kindly asked our client if she promised to renew her license and get her registration current.  Our client promised the judge that she would.  He then dismissed the 14601.1(a) and Vehicle Code § 4000 charges, but had our client plea no contest to a misdemeanor failure to appear in court charge (Vehicle Code § 40508) and released her with time served (two days) and no fine. 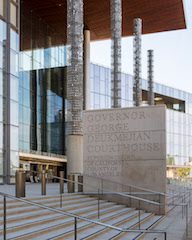 Long Beach Courthouse
The client left the courthouse shaken up and renewed her license and registration soon thereafter.
From that day in 1994 to 2019, she lived a fairly good life.  She remained clear of any criminal cases and earned a bachelor’s degree in liberal studies and later, a master of science in counseling, both from California State University, Dominguez Hills.  She gave birth to a daughter and raised her as a single mother.
She also became a school psychologist for a local school and worked there for eighteen years.  Along the way she became credentialled in three subjects with the California Commission on Teacher Credentialing.
At age 48, however, she needed a change, so when a job opened up with higher pay in a neighboring school district, she applied.
However, the school district denied her application for employment, citing her 1994 misdemeanor conviction for failure to appear in court.  Our client was devastated and realized she needed to have this conviction expunged.
The client then called Greg Hill & Associates and spoke with Greg Hill.  The client explained her 1994 conviction and how she assumed the old conviction was “automatically expunged” after a certain number of years or that it “fell off” her record after ten years.  The client then explained why she sought to have the conviction “removed” and her situation in life, needing more income to support her now thirteen-year-old daughter.
Greg listened to the client explain her situation and explained to her how a conviction is never “automatically expunged” and does not “fall off” one’s record after a certain number of years.
Greg then explained how expungement works in California under Penal Code § 1203.4 and how it does not cause the conviction to disappear, nor does it delete, erase or remove a conviction, but that it does legally allow the person to enjoy a certain legal fiction because one whose petition for dismissal under Penal Code § 1203.4 may legally state he or she was never convicted of the crime.  Greg then explained the exceptions to this provision and how certain convictions are not eligible for expungement at all.
Greg then explained how the petition for dismissal (expungement is filed) and how our office would prepare a supplemental memorandum for the client, with a declaration from her explaining why she sought expungement.  Greg also explained how the Los Angeles County courts charge a $120 filing fee with such a petition.
Our office then prepared the FL-180 judicial council form, supplementing it with a short memorandum of points and authorities and a declaration signed by our client.
We then filed the petition, paid the filing fee, served the prosecution and waited for the court to assign a hearing date.  In this case, the judge assigned to the matter ruled on the petition in chambers, with no hearing, about eight weeks after we filed the petition.
The judge granted the petition, much to our client’s delight.  She now was more competitive for future job openings that she was interested in pursuing.
For more information about expungement, please click on the following articles:
Contact us.
Serving Torrance, Long Beach, Compton, Airport Courthouses and Other Courthouses.