In 2014, our client was convicted in the Long Beach Superior Court of violating Penal Code § 452(d), misdemeanor arson.  He was originally arrested and booked on felony arson charges, Penal Code § 451(d), but the complaint was later amended to add a count two, misdemeanor arson, to which he entered a plea.  He was then placed on two years of informal, or summary, probation.
The underlining incident leading to the complaint was panic attack our client, then age 50, suffered when he stopped using his prescribed medication (Atripia for his HIV).  Atripia is a very powerful medication that his doctor warned him about missing any daily intake.  The doctor recommended that if our client missed one day’s dose to double up the dosage the following day.
One day, he did forget to take the medication.  The next day, he doubled the dosage and immediately began feeling odd.  He decided to take a short walk to get some fresh air.  He left his apartment and accidentally locked himself out, leaving his key inside.  When he returned to his apartment, he became convinced that someone was inside, burglarizing it. 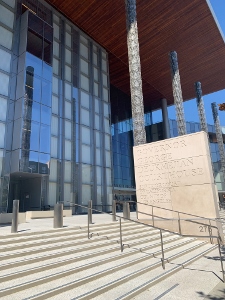 He also believed some workers at the apartment complex were helping the burglars by acting as lookouts.
So, our client decided not to call the police, but to create a fire so that the fire department would come and the burglar, hearing sirens, would leave.  Our client therefore lit a trash can and its contents on fire, being careful to do so next to the apartment pool so he could nudge the trashcan into the pool in case the fire grew too quickly and the fire department did not arrive.
The fire department arrived and the police, too.  Our client explained that he had set the fire and why, but police did not empathize with his story.
After the conviction, our client was awarded Social Security Disability Insurance due to his medical conditions which include Peripheral Neuropathy, HIV and Patella Femoral Syndrome.  He quit his job where he had worked for many years as a Teamster driving line-haul for USF Reddaway in Compton.

Once he received the small pension, he moved to Grants Pass, Oregon where the cost of living is much less and he would be near his family.  He eventually ended up having to move in with his sister.  He did not realize this conviction would bar him from securing housing.  Each rental company informed him that they completed backgrounds before renting to any individuals.  This left him feeling distraught, especially since he knew he was a burden to his sister’s family.

He contacted our office about having the conviction expunged and spoke with Greg Hill.  Greg first went to the courthouse to verify that the client had indeed successfully completed probation, which was indeed true.  Greg then explained that expungement did not actually erase, delete or remove the conviction, but it did allow the client the legal right to answer “no” to any question about being convicted (with some exceptions) for the subject offense.

The client understood the limitations and so Greg Hill & Associates prepared the Petition for Dismissal, along with a Supplemental Memorandum and a declaration from our client explaining why he requested to have the conviction expunged.  The Supplemental Memorandum further explained the underlying case facts and the authority (Penal Code § 1203.4) the judge has to order a plea withdrawn and changed back to not guilty while then also dismissing the case (expungement).

The judge hearing the petition granted the petition with no hesitation and Greg thereafter advised the client of the good news.  The client was very happy because he was keen to move out from his sister’s home.  He was very happy to begin applying for housing in a new area of Grants Pass.
For more information about expungement, please click on the following articles:
Contact us.