Our client, age 28, worked at a Rolling Hills Estates business in the Peninsula Center area.  She worked at the front cash register area, so she often dealt with refunding money onto a customer’s credit card if the customer returned an item.
Our client worked for the business for about two months before she started faking returns to a customer, but keeping the cash that was supposed to be handed back to the customer.
She at first started small, perhaps just to see if she would get caught and then if caught, since the amount was low, perhaps be reprimanded only by her employer.  Her first “customer return” was just $23.  Her employer did not notice what she did, so she gradually increased the “customer returns” to over $200.
What she would do is create a customer refund, but then instead of handing the customer the cash back, she would put the cash in her sleeve, just in case a video camera above the cash register was recording her.  Her total “take” in fourteen transactions was $1,639.23.
Her employer did notice what was going on and called the Lomita Sheriff’s Department, who reviewed the videos from the camera above the cash register.  The client was fired once the employer found out about the losses, as they could not trust her to work at the business anymore. 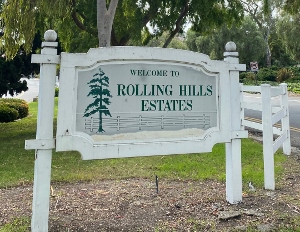 Rolling Hills Estates City Sign
When the client received a phone call from the Lomita Sheriffs, she called Greg Hill & Associates instead.
Greg listened to the client explain what she was suspected of, although she was unsure if the employer would be able to uncover all her thefts.  Greg recommended that the client enroll in and complete an online shoplifting prevention course, which she promptly did.  He also explained what the Lomita Sheriffs needed from her, most likely, and why they were calling her.
Greg advised the client to refer the handling detective to him instead of the client attempting to explain herself to the detective.
Perhaps as a consequence of our client refusing to discuss the case with law enforcement, no criminal case was filed against our client for approximately ten months.  This lapse in time allowed our client to obtain a new job despite pending charges.
Charges were filed, however, about two months before the one-year misdemeanor statute of limitations passed.  As is customary in Torrance Superior Court, the court did not advise our client of the case being filed and instead, conducted an arraignment without notifying our client to appear.  The judge then issued a bench warrant for our client’s failure to appear.
Our office became aware of the bench warrant upon calling the criminal clerk’s office to check on a filing.
Greg Hill then promptly appeared on the client’s behalf in the Torrance court to recall the bench warrant and enter a not guilty plea on the complaint.  Our client was surprisingly charged with just one count of misdemeanor grand theft, Penal Code section 487(a).
Greg obtained the police report and reviewed our client’s prior criminal history.  Our client had no convictions since turning 18, however, as a juvenile, she sustained adjudications (a conviction in juvenile court) for assault and battery twice and petty theft (Penal Code § 484(a)).  In reviewing the police report and its thorough documentation of the fourteen incidents of stealing, one could not help but appreciate how our client was not charged with fourteen counts of embezzlement (Penal Code § 503), as each incident happened on different days, or fourteen counts of petty theft.  It was also fortunate that our client was not charged with a felony, as the client appeared on video in fourteen instances and appeared to have engaged in planning to hide her thefts.
The initial plea bargain offered to our client was that she plea no contest to a charge of violating Penal Code § 487(a), with the client being placed on informal, or summary, probation for thirty-six months, contingent upon her serving 30 days in county jail, paying a court fine of $300 plus penalties and assessments (total about $1,450), payment to the victim store of all amounts taken,  and an agreement to stay away from the Rolling Hills store that was the victim of our client’s thefts.  The prosecutor commented to Greg that she thought this case really should have been filed as a felony for embezzlement.
The client was quite concerned about serving any time in jail and losing her present job.
Greg negotiated the plea bargain terms to fifteen days of community labor in place of the thirty days of county jail and the client accepted the improved offer.  She was very happy to resolve the case for a misdemeanor with no jail.
For more information about embezzlement and grand theft, please click on the following articles:
Contact us.
Serving Torrance, Long Beach, Compton, Airport Courthouses and Other Courthouses.