Our client, a college student, went out with a few of his friends for dinner and drinks. While he was the designated driver, he still drank – and not just one or two beers.

As the group was returning home at approximately midnight, our client attempted to make a left turn at an intersection. He lost control of the car and flipped it due the car being “tripped” by train tracks. The car came to rest on its tires. The passengers and our client were quite shaken up, especially the passenger in the backseat, who was not wearing a seat belt. As the car flipped, she was tossed about inside the car and broke her forearm.

The group then saw a train approaching the car and attempted to push the car off the track, as there was not enough time to start the car back up and move it. The group was unable to move it fully off the track and the Union Pacific train struck the rear of the BMV. 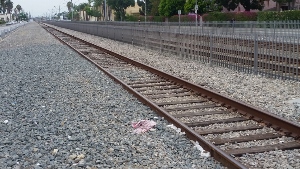 Train Tracks in Los Angeles
Our client and his friends then walked over to a nearby fast food restaurant to make the necessary phone calls to get home and medical treatment for the broken arm of the passenger. They waited at the restaurant for over an hour, when eventually, police stopped in and asked our client if he was involved in the car versus train collision.

Our client replied that he was indeed the driver and admitted to drinking seven beers earlier in the evening. Police then put our client through a series of field sobriety tests, which he failed. The client was then asked to submit to a breath test in the restaurant parking lot and his breath alcohol content was measured at 0.172% and 0.166%. He was then arrested on charges of violating Vehicle Code section 23153(a) and 23153(b), felony DUI with injuries.

The client then hired Greg Hill & Associates. Greg listened to the client explain the facts and formulated a strategy to reduce the charges and possibly even a dismissal.

The police report arrived in response to Greg’s letter and it was noteworthy for not stating the time of the accident, or when the client last drove. Consequently, the blood alcohol content measurement was possibly inadmissible if the test was taken more than three hours after the client last drove, under Vehicle Code § 23153(b). Under this code section, the BAC measurement is only admissible to prove the driver’s intoxication level if taken within three hours of when the driver last drove.

In our client’s case, there was no proof of when the client last drove, although our client conceded that if each of his passengers were to be asked, it would be likely that their answers to this question would establish the time of last driving within three hours of the breath test.

Greg, however, negotiated with the downtown Los Angeles County District Attorney assigned to the case at the Clara Shortridge Folz criminal courthouse, explaining the issue. The prosecutor recognized the problem with the case, but also commented that if the matter were to be taken to trial, each passenger would be asked about this issue and one or more might answer in a way that would make the blood alcohol content relevant. Recognizing that risk that this also might not happen, the prosecutor agreed to reduce the case to a misdemeanor.

The case was then refiled in the East Los Angeles courthouse. Greg made the same argument with the district attorney at the East LA court, who agreed to enter into a plea bargain that recognized this risk, but was nevertheless rather painful for our client: 36 months of summary probation, ten days of county jail for the injury to the passenger, a $500 fine plus penalties and assessments for the high blood alcohol content and a nine-month alcohol awareness program.

The client gladly accepted the plea bargain, relieved to simply avoid a felony and only have ten days of county jail. Indeed, had the client been convicted of a felony, he would have faced up to three years in state prison.

For more information about hit and run charges as a felony and what punishment is usual on a first time DUI as a misdemeanor, click on the following articles: