In 2017, when our client was 27 years old, he was arrested and later convicted of DUI at the Metropolitan Courthouse in downtown Los Angeles (at 1945 Hill Street).  This was a first-time DUI for our client, stemming from an arrest on the southbound I-110 Freeway when his blood alcohol content was measured at 0.14%.
The terms of his probation were three years of informal, or summary probation, during which time he would be required to enroll in and complete an approved three-month alcohol awareness program (the AB541 program), pay a court fine of $390, plus penalties and assessments (total owed was $1,514) and attend ten Alcoholics Anonymous (AA) meetings.
During his probation, our client worked as a front-desk agent at a well-recognized hotel in Santa Monica.  He found pleasure in helping tourists from all over the world learn about the area and find activities to make their vacation complete. 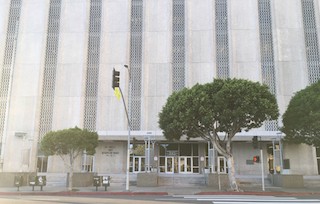 Metro Courthouse
However, one cannot be a front-desk clerk for one’s entire life.  It does not pay much.  Moreover, he had observed how the hotel operated and thought he could help manage the hotel better.  So, he applied and interviewed for management positions at the hotel and at other hotels.  However, when the employers learned of his probationary status, he was told they could not hire him.  Our client experienced this same response from one potential employer to the next.
This left him in a very precarious financial situation, so he got a second job in a hotel in San Pedro, also as a front-desk clerk.  However, the combined income from both jobs still only left him barely able to cover his family’s monthly expenses.  He financially supported his elderly mother, girlfriend and her three young children.  He was fearful that he would not be able to keep a roof over their heads.  This left left him feeling distraught, especially since he worked so much that he rarely spent quality time with his family.
In addition, our client was not a U.S. citizen and he could not apply for U.S. citizenship while on probation.  He was fearful that, while he had lived here in the United States for seventeen years, he would be forced to leave if he could become a citizen.
Our office contacted the client as a matter of habit after the client completed half the period of probation.  He did not respond.
But once he reached the two-year mark in the three years of informal probation, he called up Greg Hill & Associates to follow up on the earlier e-mail about early termination of probation and then expungement.
The client spoke with Greg Hill about the general process of filing a motion for early termination of probation and then, if probation is terminated early, expungement.  Greg explained what the judge would consider in each motion and how expungement does not erase, delete or remove the record of one having been charged with a certain crime (here, DUI), but that if granted, legally allowed the person convicted to state he was not convicted, with certain exceptions that Greg explained.
The client then hired Greg Hill & Associates to prepare, file and serve the motion for early termination of probation.  The motion was filed in the Metropolitan Courthouse and filed with the Los Angeles City Attorney’s Office.
Our office then appeared in court on the client’s behalf (the client stayed at work) and the judge granted the motion to terminate probation at the two-year mark, one year early.  The client was very happy about this, as it meant more employers would be interested in him because he was no longer on probation.
Greg Hill & Associates then prepared, filed and served the petition for dismissal (expungement) in the Metropolitan Courthouse as well.  Our office paid the $120 filing fee for such a petition in Los Angeles County as well.
A hearing date was set on the petition and the same judge granted the petition for dismissal, which made our client very happy.  These rulings opened up new jobs for our client, which meant he could earn more and support his extended family and no longer fear having to return to his birthplace outside the United States.  He was very happy.
For more information about early termination of probation and expungement, please click on the following articles:
Contact us.