We have handled a lot of DUI’s involving traffic stops for clients allegedly speeding and lane straddling, especially along the westbound 91 Freeway approaching the 110 and on the 110 Freeway southbound after the 105 Interchange. 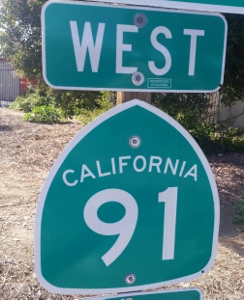 The CHP usually makes the traffic stop, so MVARS (mobile video audio recording system) tape can be reviewed to verify what the CHP officer claims our client did. The CHP often will release the MVARS to our office with a proper request and advance payment of a copying fee.

In a Nutshell:  No file in a DUI case involving an arrest at 1:20 a.m. for speeding 86 miles per hour and lane straddling on the 91 Freeway. He then submitted to a preliminary alcohol screening (PAS) test and blew 0.08% twice. Our office then received the MVARS tape, which showed no lane straddling and no speeding. We sent it to the Compton DA’s office and no case was filed.

In the following case, our 42-year-old client was allegedly traveling at 86 miles per hour and lane straddling on the westbound 91 Freeway approaching the 110 – 91 interchange. It was 1:20 a.m. and our client was coming home alone after a night out with co-workers. He had drank a few beers, but spread them out over several hours, so he felt safe to drive. Our client had no criminal history.

A CHP officer pulled our client once our client exited at Central Avenue, which is about a mile east of the 110-91 interchange. There is a flat area of the road off Central Avenue there with a wide sidewalk that officers often use to administer field sobriety tests (“roadside gymnastic tests”).

The client felt confident that he was not impaired by alcohol, so he submitted to a preliminary alcohol screening (PAS) test, also known as a roadside breath test. His breath was measured at 0.08% and 0.08% on each of his two samples. He also allegedly failed to successfully complete the field sobriety tests.

He was arrested and taken to the Compton Sheriff’s Station right next to the Compton Courthouse. While there, he submitted to a further breath test, but was not told what the results were.

When released, he nervously researched DUI on the Internet to find out what he faced and if jail time was mandatory. The more he read, the more confused he became, reading about ignition interlock devices (IID’s), DMV hearings, Mothers Against Drunk Driving (MADD) Victim Impact Panels (VIP’s), the Hospital and Morgue Program (HAM). What he did not read about was defending the case, as he did not think he was speeding at all, despite the police officer telling him he measured his speed at 86 miles per hour.

The client then called Greg Hill & Associates on a Saturday afternoon. Greg answered the phone and discussed the case with the client for close to an hour. Greg explained how speeding can be found either by simply exceeding he posted speed limit or traveling too fast for conditions. Greg further explained how for lane straddling to constitute sufficient reasonable cause to make a traffic stop, the straddling must exceeding six inches into the neighboring lane.  People v. Perez (1985) 175 Cal.App.3d Supp. 8, 10, which is pretty significant movement into the adjacent lane.

The client said he was extremely confident that he did not stray into an adjacent lane by six inches and he did not think he was speeding at all. So Greg subpoenaed the MVARS tape from the CHP station and received it well before the first court appearance (some stations are not so cooperative).

Greg reviewed the MVARS video, which showed our client traveling at the speed of surrounding traffic can did not show any lane straddling whatsoever. Greg then made a copy of the disc and sent it to the Compton District Attorney’s office, asking it to review the video before filing a case that would most likely be dismissed for an improper traffic stop.

When the arraignment date arrived three weeks later, Greg went to the Compton Courthouse and no case was filed. The DA’s office reported that it was a “DA Reject.” Obviously, the client was very happy.