Our client, now 28, had been convicted six years earlier of grand theft in a case at the Clara Shortridge Foltz downtown Los Angeles courthouse.  She had entered a no contest plea to violating Penal Code § 487 in a scheme wherein she and her then-boyfriend embezzled over $57,100 from Wells Fargo while she worked there as a bank teller.
The client, at the time, had a two-year-old son and was a single mom struggling to pay her expenses.

In a Nutshell: Client has felony grand theft conviction from six years earlier at the Downtown Los Angeles courthouse involving $57,100 embezzled by her and her then-boyfriend from Wells Fargo reduced to a misdemeanor and then has the conviction expunged, despite not paying full restitution.

The plea bargain was unusual in that while the amount stolen was well over $10,000, she was granted probation with no time in custody.  This was extremely lenient because as a general rule in Los Angeles County, anyone convicted of theft exceeding $10,000 is usually sentenced to a “bullet,” meaning at least one year in county jail as a condition of probation.
As a further part of the plea bargain, she agreed to pay restitution of $57,100 over three years, but only paid roughly $700 until the last month, when the judge kindly said that he would consider restitution paid if she paid $500 more.  She then did so.

While finishing probation, she was unaware that she could have her conviction expunged and even request a reduction of the felony to a misdemeanor until someone told her in 2018 to speak to an attorney about her case.
She then called up Greg Hill & Associates and spoke to Greg Hill.  Greg asked some basic questions about the case and expressed skepticism that a judge would reduce her felony to a misdemeanor under Penal Code § 17(b)(3) because the size of the theft was so large.
However, the client and Greg agreed that the motion for reclassification should be prepared, filed and tried.  The worst thing that could happen is that the judge would say no to the request.  Otherwise, Greg said the petition for dismissal under 1203.4 (expungement) was a “slam-dunk,” as she successfully completed probation, was not facing any pending charges and was not otherwise on probation or parole. 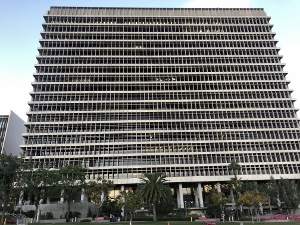 Greg Hill & Associates then prepared the motion for reclassification of the felony as a misdemeanor, analyzing the factors in aggravation and mitigation under California Rules of Court, Rule 4.414.  The client’s son was now eight and the client had a daughter, age two.  She remained a single mom.  In embezzling the funds, she was in an abusive relationship with her boyfriend who threatened to beat her if she did not help steal the money for him, so out of fear and coercion, she did so.
The motion for reduction of the charge from a felony to a misdemeanor and petition for dismissal was then filed in the downtown Los Angeles courthouse, the Clara Shortridge Foltz building at 210 West Temple Street.  Included with the petition for dismissal and the motion under § 17(b)(3) was a declaration from the client testifying to how her conviction for a felony had prevented her from volunteering in her son’s classroom at school and how she had been denied many jobs that she had applied for over the years.  It also explained the coercion she was under by her then-boyfriend to embezzle the money for him.
The hearing then arrived and the client was present with Greg Hill.  Amazingly, the District Attorney’s Office had no opposition to the reduction to a misdemeanor or the expungement and the judge granted both the motion and the petition.  It was especially amazing that the felony was reduced to a misdemeanor.
The client was so happy she cried once Greg and she left the building.  She said she felt like she had a gigantic burden off her shoulders for once.

For more information about expungement and 17(b)(3), please click on the following articles:
Contact us.
Serving Torrance, Long Beach, Compton, Airport Courthouses and Other Courthouses.