Our client, age 20, was lost and driving her car southbound on the 605 Freeway near the intersection with the 5 Freeway. It was about 2:30 a.m. and she was returning home to Palos Verdes from a party in Azusa. 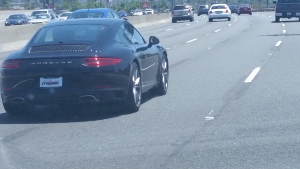 As she approached the turnoff for the southbound 5, knowing she was lost, her confusion suddenly cleared and she realized where she was. She avoided going south on the 5, but did so by making a quick lane change to the left that caught the eye of a CHP officer driving just behind her.

Synopsis:  Downey, underage driver with a BAC of 0.17%, negotiated to three-month DUI program.

This meant that the officer who ultimately wrote the police report did not have personal knowledge of our client’s driving at all and thus had to report it based on what the first officer told him. The reporting of this is textbook “double hearsay” barred from admission even in a DMV hearing, according to McNary v. DMV (1996) 45 Cal.App.4th 688, quoting Imachi v. DMV (1992) 2 Cal.App.4th 809, 3 Cal.Rptr.2d 478. This type of report is not admissible under Government Code § 11513, as is hearsay of just one level, provided the report is not subject to any other evidentiary objection (i.e., foundation).

In our client’s case, the second CHP officer had both motorists complete the Field Sobriety Tests at the same time, a significant violation of CHP protocol, especially since immediately after the test he gave each motorist a breathalyzer test. This all took place in less than ten minutes.

In proceeding as he did, the CHP officer violated section 1219.3 of Title 17 of the California Code, which requires that, “. . . The breath sample shall be collected only after the subject has been under continuous observation for at least fifteen minutes prior to collection of the breath sample, during which time the subject must not have ingested alcoholic beverages or other fluids, regurgitated, vomited, eaten, or smoked.” This section was recognized by our courts, too, at People v. Sandra Molenda (2009) 172 Cal.App.4th 974.

Here, our client could not have been under continuous observation for fifteen minutes unless the officer could watch both motorists exclusively at the same time, which is what the CHP officer claimed at our client’s DMV hearing. Moreover, fifteen minutes had not passed. Finally, our client suffered from GERD (gastroesophageal reflux disease), which caused her to release stomach gas continuously and which can affect the reading of the breathalyzer machine quite a bit. In someone suffering from GERD, normal ethanol from the lungs is combined with ethanol gas from the stomach, making one’s breath much higher in alcohol content than just one’s blood.

The field sobriety tests, most of which involve balance, were also conducted under windy conditions on the sloped side of the 605 Freeway.

The client was then arrested and taken to the Whittier CHP station, from which she was later released after signing a promise to appear in court at the Downey Superior Court in about eight weeks. The client then called Greg Hill & Associates and met with Greg Hill.

The client explained what had happened and Greg described what he believed would happen in court.

Greg Hill then appeared on the client’s behalf in the Downey Superior Court for the arraignment. During the discussions in court prior to the case being called, Greg explained the problems with the CHP report. The District Attorney in Downey refused to consider such issues at all and offered our client a nine-month alcohol awareness program as well as fines well in excess of the minimums allowed. This was unusual and unprofessional.

Greg Hill therefore went to the District Attorney’s supervisor, who respectfully listened to Greg explain the problems with the police report, the field sobriety tests and our client’s medical condition. He then lowered the terms of the plea bargain offered to a three-month alcohol awareness program and minimal fines (plus penalties and assessments).

Our client gladly accepted the offer, appreciating that were she to go to trial, the judge might impose significantly more severe terms if she was convicted.

For more information about GERD, field sobriety tests and the mouth alcohol defense to DUI, click on the following articles: