Our client, age 42, was arrested by the Major Crimes Bureau Vice Unit and the Lynwood Special Assignment Deputies for solicitation of prostitution after speaking with a police decoy along northbound Long Beach Boulevard.  It was a sad situation because he was married and had two young kids involved in Girl Scouts and Boy Scouts.

The Point of This Summary:  Client had his conviction for trespassing expunged.  The conviction had been a negotiated disposition after our client was cited for solicitation of prostitution along Long Beach Boulevard in Compton. The conviction was creating employment barriers to our client, forcing him into accepting a lower paying job.

After the conviction, which was negotiated to trespassing (Penal Code § 602(m)) to avoid the stigma of prostitution, which was his first ever conviction, he had trouble finding a job.  However, he eventually did land one with a logistics company handling products being imported through the Port of Los Angeles.  The job title was distribution manager, but the pay was so low, he could barely support his family.  He was constantly looking for a better paying job, but he was repeatedly told that his criminal record barred him.  It was extremely frustrating and the financial pressure created by earning so little made his wife angry all the time.
Half-way through his probation, Greg Hill contacted the client to ask him if he was interested in early termination of probation and expungement.  The client ignored the e-mail, but then contacted Greg Hill & Associates about expungement once his probation ended.
Greg and the client discussed his employment situation and the sad fact that the Boy Scouts and Girl Scouts no longer allowed our client to volunteer in scouting events.  This deeply hurt our client’s self-esteem, as he wanted to participate in his children’s lives more than ever when his pay was not able to provide them many things other children at his children’s school enjoyed.
Greg then explained the limitations of an expungement and tried to dispel many of the common misperceptions about what expungement does.  Greg explained that in California, expungement did not erase, delete, reverse or remove the record of the case (as it did in other states), but did change the “no contest” plea to “not guilty” and dismissed the case.
Greg also explained how relief under Penal Code § 1203.4 (“expungement”) allowed the client to legally answer “no” if asked on any employment application whether he had been convicted.  Greg explained the exceptions to this benefit – if he was applying for a government job, for a state license (i.e. doctor, lawyer, CPA, architect, insurance broker, etc.), to operate a state lottery or running for public office.  The client was happy to move forward with the petition for dismissal (also called an expungement motion).
Greg’s office then prepared the petition, including with it a supplemental memorandum that let the judge know the basic case facts, its authority to act and a declaration from our client attesting that he was not on probation or parole in any other case, not in custody and not facing any other pending charges.  The declaration also described the reason for his request for relief under Penal Code § 1203.4, which for our client included a discussion of his yearning to volunteer for supervision of his children’s activities that this conviction now barred. 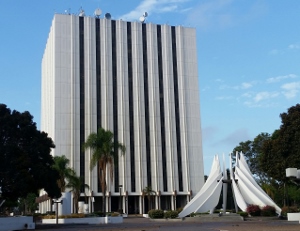 Compton Superior Courthouse
Greg then filed the petition in the Compton Superior Court and served the District Attorney there with the paperwork.  Greg also paid the $120 court fee for filing this request.
Approximately four weeks later, the court granted the petition in chambers, meaning without any hearing.  The court clerk then sent Greg’s office notice of the ruling and Greg happily pdf’d this and forwarded it to the client.  Greg was careful to advise the client that the DOJ database for our client’s criminal history could take some time to update to reflect the ruling and that the client would be smart to request an updated Live Scan report prior to applying for any new job, just to make sure the potential employer sees that the prostitution case was dismissed.