Our client, age 23 and a U.S. Navy veteran, had entered a guilty plea to grand theft (Penal Code section 487) approximately twenty months before he contacted our office.  His grand theft conviction stemmed from his theft, as an employee of Rite Aid, of over $950 in cash from Rite Aid.  He had stolen the money while working as a cash register attendant.

The terms of informal, or summary, probation included thirty-six months of summary probation, contingent upon an obligation to pay back the full sum to Rite Aid, perform 120 hours (15 days) of Cal-Trans service and pay a court fine of $250, plus penalties and assessments (about $1,100).

The Main Point:  Expungement is most often sought because once a conviction is granted relief under Penal Code § 1203.4, defendant can legally answer as to that conviction “no” to any employment questionnaire (with limited exceptions) asking if that person has ever been convicted.  This legal right can make all the difference in remaining unemployed or landing a job, as the following case summary illustrates.

The conviction was particularly troubling for him, as he was unemployed when he came to our office and he believed this conviction involving a crime of dishonesty was preventing his being hired anywhere, which may have been quite true.  After all, he was a Navy veteran and many employers value former military serviceman for their work ethic, sense of team work and maturity.

His inability to find a job was a great stress in his life, as he was married and had a young daughter, age two years old now.  He wife was unable to work due to her diabetes.  He was living off of loans from family, which would not last forever.  He desperately needed a job.

He had, on his own, asked the court to terminate his summary probation after nineteen months from the conviction, which the court granted.  He then asked Greg Hill & Associates for assistance in having his conviction expunged.

Our office assembled the Petition for Dismissal under Penal Code section 1203.4 with not only the court forms, but a lengthy declaration from the client, as well as points and authorizes, citing to California case law for the judge to read to grant the petition.

Our office finds that presenting the judge with such a declaration and the case law concerning expungement can make the judge more comfortable granting the petition, as the judge feels it is the “right thing to do” and that it is legally the proper response to the petition.

Simply submitting a judicial council form is all that is required, but we like to ensure the petition is granted by giving the judge more than what is minimally required.  After all, this is a big deal for every client because it does have immediate and significant consequences for employment and promotions, as well as pay and salary determinations.

In support of his petition, our client provided us with color photocopies of his many awards and certificates of appreciation obtained while serving our country, as well as other letters of support from friends attesting to his good character, discipline and value, all of which our office submitted to the Compton Superior Court with our client’s Petition for Dismissal. 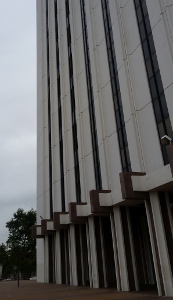 Compton Superior Courthouse
The judge in Compton granted the petition, meaning his conviction was expunged from his record.  Our client was now optimistic of becoming employed once again.  Since he had no other record, he could legally answer “no” on any employment application question about a conviction for a misdemeanor, unless he were to apply for a public office job, a job with the state or federal government or to operate a lottery.