Our client and his girlfriend were driving northbound on the Harbor Freeway, the I-110. They had been out to dinner and for a few drinks in Hermosa Beach. It was 1:00 a.m. The freeway seemed empty. The client distinctly remembered saying to himself how the closest car behind him must have been a full mile behind as he looked around.

Suddenly, in their rear-view mirror, they saw a blue and red flashing light and pulled over at the Torrance Boulevard off ramp. The CHP officer told him that he had noticed our client’s vehicle registration sticker was expired, so he pulled our client over to remind him to renew it. Our client, in disbelief of what seemed like bionic eyes, thanked the officer. 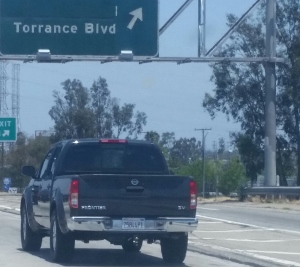 Interstate 110 at Torrance Boulevard Exit
In the course of discussing the vehicle registration, the officer claimed, he “detected the odor of alcohol.” The officer then asked our client if he had been drinking that evening. He also asked to search the car.

Our client denied the officer’s request to search the car, saying he would like to know the reason for the search. In response, the officer reached under the driver’s seat and pulled out the loaded weapon, a Beretta 9 millimeter, smiling knowingly. The gun was registered to our client.

Our client then submitted to a breath test at the scene, registering a 0.11% blood alcohol content (BAC). He was promptly arrested without any field sobriety tests being given first. The gun was seized.

The client, who lived in Riverside County, immediately called Greg Hill & Associates, petrified that he would go to jail or even prison for the loaded gun charge. Greg listened to the client explain what happened and how he just could not believe the officer could have possibly read the month label on his truck’s license plate.

Greg asked the client to have someone other than him take pictures of the car’s rear license plate at night with no background lights from various distances, each farther and farther away. The purpose of the photos was to show the prosecutor why the police officer made a traffic stop without reasonable suspicion of any Vehicle Code violation. The reason for the stop was only established after the stop, in other words.

The client took the pictures and provided them to Greg. They were great for showing how the month was just not visible from more than about 50 feet, yet the CHP officer had his flashing lights illuminated from a solid 300 meters away.

At the arraignment in Compton Superior Court, Greg showed the prosecutor the photographs and explained he would most likely be filing a motion to suppress evidence unless the prosecutor offered what the client told Greg he would agree to – a wet reckless. Greg also demanded that the gun charge, a violation of Penal Code § 25400(A)(1), be dismissed based on our client’s girlfriend, who would testify that the officer reached under the seat to search the car without consent.

The prosecutor did not know what to say, being a junior district attorney and unaccustomed to an aggressive defense attorney. While Greg is generally calm and easy to get along with, there are times when it is appropriate to fight like crazy and this was one of those times.

Greg demanded to speak with the prosecutor’s supervisor, which shocked the young prosecutor.

Greg also demanded a copy of the CHP officer’s MVARS (mobile video audio recording system), which would show that the officer never got close enough to see the sticker on the license plate before initiating the traffic stop. The prosecutor delayed on requesting it, perhaps dreading the truth it would reveal.

On the third appearance, a new prosecutor was assigned to the case, a prosecutor Greg knew from other cases. The prosecutor told Greg that he had “really rattled” the other prosecutor, but that she, he and their supervisor had a meeting about the case and agreed to dismiss the gun charge and amend the complaint just as our client requested. The fee demanded was just $150, plus penalties and assessments.

The client was very happy with the outcome, resolving the case exactly as he had hoped.