Our client, age 34, went out to Pedone’s Pizza in Hermosa Beach with his girlfriend.  The two then walked over to the Pier Plaza area two blocks away and shared a pitcher of beer at Baja Sharkeez.  They then went to Hennessey’s and shared another pitcher of beer before deciding to call it a night.
Our client was driving and his girlfriend told him to go faster or let her drive.  He pulled over and let her drive, assuming she was not feeling as drunk as he was.  It was about 2:00 a.m.
She then started driving quite recklessly and he told her to pull over, but she insisted on driving.  He became worried and filmed her with his cell phone, recording her saying, “Come on, you know this is how I fly!”  She had taken off her shoes to drive barefoot and left her shoes in the passenger side.
She then lost control of the car as the two were heading eastbound on Manhattan Beach Boulevard in an area that is part of Redondo Beach near Blossom Lane.  As she lost control, the car veered wildly to the left and then to the right before coming to a sudden stop.  The airbags on both the driver’s side and passenger side inflated.
In the chaos that followed this sudden stop, our client hit his head on the top of the headrest on the passenger side and his head started to bleed.  His girlfriend sustained an open wound to her forehead above her right eye and there was blood all over the driver’s side airbag from this injury.
Our client immediately got out of the car and helped his girlfriend from the car.  To help get her out without the airbag further hurting her face, his girlfriend moved the driver’s seat backwards to make it easier to get out of the car.
Police arrived within minutes and asked who was driving.  Our client truthfully told police that his girlfriend was driving the car.  His girlfriend, who was not a U.S. citizen and had four children, said our client was driving the car.  The Redondo Beach Police Officer at the scene then arrested our client, who is six feet, four inches tall. 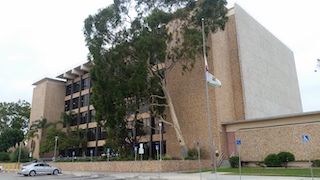 Torrance Courthouse
The police noted in their report that they concluded he was the driver because the driver’s seat was positioned too far away from the gas and brake pedals for the female to drive the car, as she was only five feet, four inches tall.  The police also determined that the female was the passenger because her shoes were in the passenger side of the car.
Our client became upset that he was arrested for DUI because this would be his second such arrest for DUI within ten years.  He had been convicted of DUI in Tuscon, Arizona nine years earlier.  In the meantime, our client’s girlfriend was taken away from the scene by an ambulance for her head injury.
Police asked our client to submit to a breath test at the scene.  He refused, as is his right.  Police asked him to submit to field sobriety tests although he had just suffered a major head injury and had just been in a car accident.  He refused to participate in such tests, as also is his right.
Police then took him to the Redondo Beach Police Station, where they asked him to submit to a breath or blood test.  He refused, so police obtained a search warrant and forcibly drew his blood.
Our client was then released after posting bail for felony DUI and signed a promise to appear in the Torrance Courthouse about two months later.
He then called Greg Hill & Associates and explained what had taken place.  Since the client did not have the police report, he did not know how the police would support their decision to arrest him as the driver, but he suspected it was because the driver’s seat was moved backwards to allow his girlfriend out of the driver’s seat area without hurting her open wound to her forehead area.
When the arraignment took place, Greg was relieved to see that the client was not charged with felony DUI, but only misdemeanor DUI.  He also noticed a great deal of photographs, some which clearly showed the passenger side airbag with no blood on it where one would expect to see lots of blood if the girlfriend had been in the passenger seat at the time of the crash.
Greg showed this to the Redondo Beach City Prosecutor’s Office, who demanded a DNA test of the blood from the passenger seat headrest and the driver’s side airbag area.
After several months, the tests came back with a DNA match for our client in the passenger seat as well as the driver’s side area.  Our client’s story that he drove the car to Hermosa Beach, but his girlfriend drove after they left the Hermosa Beach area was proven true.
The case finally was set for trial and, in the months that followed, our client picked up another DUI arrest that was prosecuted at the Compton Courthouse.
On the eve of trial for the Redondo Beach DUI, the prosecution offered to resolve the second-time DUI for reckless driving (a “wet reckless,” meaning a violation of Vehicle Code § 23103 (reckless driving) pursuant to Vehicle Code § 23103.5).  Rather than go to trial and risk up to one year in county jail, he accepted the offer, which also included three years of informal, or summary probation, attending the 18-month DUI program (SB 38), payment of a $450 court fine, plus penalties and assessments, no jail, and payment of the $245 Redondo Beach booking fee.  The client was happy with the resolution.
For more information about the issues in this case, please click on the following articles:
Contact us.
Serving Torrance, Long Beach, Compton, Airport Courthouses and Other Courthouses.