Our client, when age 28, was involved in a car accident wherein a drunk driver ran into him.  Unfortunately, our client was also drunk.  His blood alcohol content (BAC) was 0.12%.  The accident took place in Lakewood at about 2:30 a.m. on a city street (not a freeway).

Summary:  Client has his summary, or informal, probation ended early in Bellflower Superior Court.  The underlying case was a DUI with a car accident, resolved as a wet reckless (Vehicle Code § 23103 pursuant to Vehicle Code § 23103.5).  The conviction was then expunged, which was appreciated greatly by our client.

Through some luck, the criminal case filed in Bellflower Superior Court was resolved for a wet reckless (Vehicle Code § 23103 pursuant to § 23103.5), which helped him avoid an ignition interlock device (IID).  At the time, the client was home on break from the very prestigious MBA program at the Kellogg School of Management at Northwestern University outside Chicago, Illinois.  This is one of the top five MBA programs in the country. 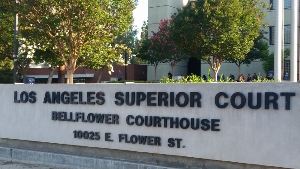 Bellflower Superior Courthouse
Unfortunately, the conviction had an immediate effect on the value of his degree.  A year after the conviction, he graduated from Kellogg and received two handsome offers of employment.  One required him to travel frequently to Canada; one did not.  The one that did not offered our client about $40,000 less annually, so our client preferred to accept the other offer for more income.
However, having a conviction for a wet reckless would certainly affect his ability to rent a car each time he traveled to Canada for work.  He could not afford, as a new hire, the embarrassment of being unable to rent a car if required by his employer.  He thus concluded he had to pass on the offer from the firm requiring travel to Canada and did so.  It merits mention here that this case resolved well before the widespread use of Uber and Lyft, even in Canada.
After completing almost half of his summary, or informal, probation, he asked Greg Hill & Associates to prepare a motion for early termination of probation and then, if the motion was granted, a petition for dismissal under Penal Code § 1203.4 (expungement of the conviction).
Greg Hill & Associates then prepared the motion and filed it with the court in Bellflower.  The judge in Bellflower reviewed the underlying plea bargain and denied the motion to terminate probation early, stating the that plea bargain was especially good and therefore implying that our client was getting greedy, or trying to get an amazing deal twice.
Greg conveyed the denial of the motion to the client, who understood the situation and appreciated the judge’s comments.
The judge, however, hinted that if our client brought the motion again at the two-year mark in his probation, she would reconsider it.  Greg understood this as an invitation to refile the motion.  Greg also understood that to prevail on the motion on the second try, his client needed to convince her that he was giving the State of California more than what it bargained for in the plea bargain, so that it was appropriate to shorten the term of probation.
Greg therefore recommended that the client attend at least 30 Alcoholic Anonymous (AA) meetings to make himself look good to the judge and show extra “consideration” in the contract, which is really what a plea bargain fundamentally is with the judge.  The client then attended 30 AA meetings and Greg refiled the motion.
This second time, after two years of probation had passed, the judge granted the motion.  She did note the thirty AA meetings with approval, saying she appreciated this.  The prosecutor, who previously had opposed the first motion, did not oppose the second motion at all.  The client was thankful that he had followed Greg’s advice to attend the 30 AA meetings.
Greg then filed the petition for dismissal of the complaint (expungement), which the judge granted as well.  The client was very happy with the final results and looked forward to work in Canada without rental car problems.
For more information about , click on the following articles:
Watch our Video about Expungement by clicking here.