Our client, age 21, was invited to his family’s gift exchange.  It was just before Christmas and our client was low on money to buy such gifts.  He was a student at L.A. Trade Tech and not working at all.
He therefore went into the Cerritos Mall Macy’s with a large empty bag.  He proceeded to load it up with a Champion windbreaker, a Fila hooded sweatshirt, two t-shirts by Champion (one with a price $40, another one at $25), a five-pack of Tommy Hilfiger men’s underwear and a pair of Nike socks.
Loss prevention officers were watching him from closed-circuit security cameras as he went behind a display and, while out of view of the Macy’s employees in the area, he was in full view of the loss prevention officers observing him through an overhead security camera.  They observed our client crouching down toward the floor, pulling each item out of his bag and then tearing off the price tags on each item of clothing.  He then dropped the price tags into a corner of the store.
They then watched our client casually walk around the store, but they sensed he would try to leave the store, so they sent two officers to follow him.  Just as they did so, our client tried to exit the store with the items in his bag.  Loss prevention stopped him just after he stepped outside the store. 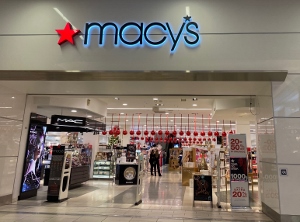 The client was cooperative with loss prevention, but explained that he was too poor to buy the clothing and it was for a family gift exchange.  Loss prevention officers were dubious of this, as it seemed like all the items were for an adult male, such as perhaps himself.
Macy’s loss prevention then called the Lakewood Sheriffs, who came to Macy’s and took our client to the Lakewood Sheriffs station, where he was booked and eventually released about four hours later after signing a promise to appear in the Bellflower Superior Court in about eight weeks.
The client called Greg Hill & Associates, as well as several other law firms, eventually hiring Greg Hill & Associates because he said, “you guys were the only ones who really listened to me.”
Greg then met with the client and further discussed the case facts, as well as answering the client’s questions about how the case would most likely proceed.  Greg recommended that the client enroll in and complete an online shoplifting prevention course from Tom Wilson counseling, Logan Social Services or the National Association of Shoplifting Prevention and then give Greg the proof of completion certificate to take to court to use in plea bargaining.
The case was filed in the Bellflower Superior Court.  Greg appeared on the client’s behalf at the arraignment so the client could stay in school.  Greg received the police report, which showed our client had taken $367.50 in items.  There was also a video tape from Macy’s that showed our client quite clearly pulling off the price tags from the clothing behind a display in the store.
The Bellflower District Attorney’s office regarded the case as fairly serious due to the dollar value of the items stolen and the client’s nonchalant demeanor in the store.  While the client had completed the online shoplifting prevention course, the prosecutor wanted our client to have a conviction for shoplifting (Penal Code § 459.5) with three years of informal, or summary probation, to pay a court fine of $300, plus penalties and assessments and perform 15 days of community service.
Greg was shocked at the severity of the offer.  This was much more, if not the most ever, Greg had seen on a plea bargain for a young person with no prior history in a shoplifting case.  Moreover, the prosecutor was unwilling to amend the complaint to allege trespassing or disturbing the peace instead, or otherwise allow any form of diversion.
Greg then submitted a Defense Position Letter with a mitigation packet showing our client’ class schedule at L.A. Trade Tech and certain certifications he had earned in the HVAC area through LA Trade Tech.  The Defense Position Letter described how our client felt pressure to bring gifts to the family gift change and made a bad decision to steal such items.  The letter included the completion certificate that our client earned from the Logan Social Services online class.
After several months of negotiating, the case finally resolved with our client still pleading to a violation of Penal Code § 459.5, but with just 18 months of informal probation, no community service and a court fine of $150, plus penalties and assessments.  Since our client had credit for one day in custody, he would get credit toward the court fine, wiping it out.  In effect, he would only have 18 months of informal probation – and a condition that he stay away from Macy’s at the Cerritos Mall.
The client was happy with the effort Greg put out to reduce the terms of the plea bargain and accepted the plea bargain.
For more information about shoplifting, please click on the following articles:
Contact us.