Our client, age 36, was at a party with former co-workers who invited him to join them at a party in El Segundo.  Our client was a “life of the party” kind of guy who was well-liked, but liked his alcohol quite a bit, too.
At some point in the party, he blacked out from drinking too much and, as he was told later, hit a woman in the face for no apparent reason, causing her a two-inch gash under her left eye, bruises to her face where he also punched her (it was not just one punch), and strained muscles to her neck and shoulders.  The woman was not his girlfriend or an ex-wife.
Police were called and he was taken to the El Segundo Police Station.  He was later booked on a felony charge of assault by means likely to cause great bodily injury (Penal Code § 245(a)(4)) and posted bail to be released.
At his arraignment at the Airport Courthouse, he read the police report and was in shock.  He had no idea why he did such a thing.  He had no prior criminal history.  He had graduated from a solid four-year university and was working in the entertainment industry, helping make television shows. 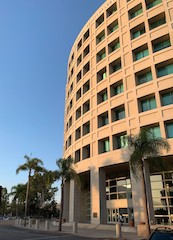 Airport Court
The prosecutor offered a no jail offer at the arraignment if he entered into a plea bargain at that point and our client accepted.  He was required to attend 52 anger management classes, two Alcoholics Anonymous (AA) classes per week for a year, pay a $300 court fee, plus penalties and assessments, restitution to the victim and stay away from her during three years of formal probation.
Our client always suspected he drank too much, but this was confirmation that such a suspicion was true.  He not only attended two AA’s per week the first year of formal probation, he continued to attend AA for the remainder of probation and stopped drinking entirely.
His career continued, but he wanted to apply at other jobs.  He knew being on probation and having a felony conviction for assault by means to cause great bodily injury would be a problem, but he did not know what to do.
After two years and eight months of probation, he contacted Greg Hill & Associates and spoke with Greg Hill about his case.  Greg explained how he could file a motion for early termination of probation and then expungement with a request to reduce the matter to a misdemeanor, but since the client already had a job and was not desperate to get a new job, he could wait until probation ended naturally and save some money on legal fees.
Greg explained how expungement does not erase the fact that a case was filed against the client or delete the charge from one’s criminal history, but it does show that the case was ultimately dismissed and the last plea is changed back to not guilty.  Greg also explained how reducing the felony to a misdemeanor under Penal Code § 17(b)(3) would restore our client’s firearm rights under California law, which our client wanted, but the ten-year ban on owning a firearm under the Lautenberg Amendment to the federal Gun Control Act would still apply.
Then, once probation ended, the client contacted Greg again and asked to proceed with the petition for dismissal and request for reduction of the felony to a misdemeanor.
Greg Hill & Associates then prepared the petition for expungement and supplemented it with a short points and authorities explaining why reduction of the felony to a misdemeanor was appropriate in this case, along with a short declaration from our client explaining his request.  In this case, our client explained how he had continued to attend AA meetings for three years and had marked three years of sobriety, which he intended to continue indefinitely.  He also explained how he wanted to remove the stigma of being a convicted felon.
Our office then filed the motion, paid the $120 filing fee for a petition for dismissal and served the Airport District Attorney’s office.
At the hearing on the motion, the judge granted the motion, reducing the 245(a)(4) to a misdemeanor and then expunging the conviction.
Our client was extremely happy with this result.
For more information about expungement, please click on the following articles:
Contact us.
Serving Torrance, Long Beach, Compton, Airport Courthouses and Other Courthouses.