It was a summer evening and our client, age 17, had his provisional license for two months.  He was out with his girlfriend and had a few beers.
As he was driving her home at about 1:30 a.m., he passed a police car while both were traveling northbound on Sepulveda near 18th Street in Manhattan Beach.  The police watched this and immediately pulled him over, allegedly for traveling 50 miles per hour in a 35 mile per hour zone and making an unsafe lane change without using his turn signal.
When police stopped our client, they asked him if he had been drinking because, according to the police, they detected the odor of alcohol and noticed our client was slurring his words and had red, watery eyes.
Police interestingly only administered a single field sobriety test, the Horizontal Gaze Nystagmus (HGN) test, which they claimed our client failed.
After this one test, which only takes a minute or two to administer, police had our client give a breath sample at the scene with a Preliminary Alcohol Screening (PAS) unit.  Our client’s blood alcohol content or BAC, extrapolated from his breath sample, was 0.076% and 0.063%. 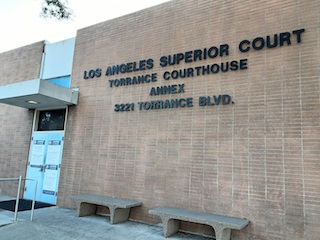 Torrance Traffic Court
At this point, his parents arrived at the scene and asked to take custody of their son, which the police accommodated.  Our client never went to the police station or gave a further breath sample (or blood sample).
The client’s concerned parents called Greg Hill & Associates the following day and described what had happened to their son.  The son later called and spoke with Greg, too.  Greg explained how such cases against juveniles can be brought several different ways, but because his BAC was below 0.08%, Greg anticipated that the case would be assigned to traffic court as an infraction, not a misdemeanor.  Greg adjusted his fee quite a bit lower because of this.
Greg further commented that alleged speeding is difficult to rebut in court, but since the police claimed our client was speeding only by looking in their rearview mirrors, it was certainly not an approved methodology taught in any DUI training.  Nonetheless, it had a logic to it that was hard to refute.  If the police were traveling at 35 miles per hour and our client passed their car, it is tough to argue that the client was not speeding, assuming the speedometer for the car was accurately calibrated.
An unsafe lane change is easier to rebuff if the police report does not describe any other car affected by the lane change.  The case of People v. Carmona (2011) 195 Cal.App.4th 1385 holds that a lane change made without using one’s turn signal is not a Vehicle Code violation if no other vehicles or motorists are affected by the lane change.
As Greg predicted, the case indeed was assigned to the Torrance Traffic Court for violations of Vehicle Code § 23140(a) (Driving with a BAC of 0.05% or higher while under Age 21) and Vehicle Code § 12814.6(B)(1)(A) (Driving with a passenger between the hours of 11 p.m. and 5 a.m. while licensed for less than six months) and Greg appeared for the client.  Greg set the case for trial.
Unfortunately, the arresting officer did appear for trial.  The officer’s testimony began by describing how he observed our client passing him and pulling him over.  When the officer began to testify concerning the breath measurement for the PAS device, Greg objected on foundation grounds.  Greg explained that the officer needed to assure the judge that the PAS was properly calibrated, inspected and maintained.  Greg said that the Manhattan Beach Police Department should have brought the Department’s PAS officer to court.  The judge agreed and sustained the objection.
The judge, however, then asked the officer how many DUI arrests he had made in his career and the officer said 5,000.  The judge then asked the officer whether he had learned to estimate a driver’s BAC based on how the driver performed in his field sobriety tests.  The officer said he certainly had learned to do this and stated that he estimated our client’s BAC was between 0.06% and 0.08%.
Greg cross-examined the officer on how many of the 5,000 arrests involved drivers under age 21 and the officer said 500.  Greg then asked him how many of the underage drivers were only tested with one field sobriety test and the officer said 50.
Greg then argued that the officer’s testimony about estimating our client’s BAC lacked foundation because it was based on such a small sample size.
Greg then argued that on the second count, the Manhattan Beach Police Department failed to establish that our client had his license for less than six months.  For example, there was no DMV document that showed this.
The judge found our client guilty on the § 23140(a) count, commenting that the officer’s vast experience was sufficient for the judge to trust his estimate, but found our client not guilty on the Vehicle Code § 12814.6(B)(1)(A) count.  The judge ordered our client to pay a $100 fine, plus penalties and assessments, within six months.  There was no probation and no alcohol awareness class required by the court.
For more information about Under-21 DUI issues, please click on the following articles:
Contact us.
Serving Torrance, Long Beach, Compton, Airport Courthouses and Other Courthouses.