Home
Other Information
Criminal Defense Articles
Without Proof of Causation of Injury, Is Restitution Proper?

Without Proof of Causation of Injury, Is Restitution Proper?

Would it be fair if a person charged with hit and run was found responsible for paying the hospital bills for someone who was injured in a baseball game two days before the hit and run?  Of course not, most people would agree.

However, strict proof of causation is often overlooked in restitution hearings and victims, while often victims of terrible crimes, are given the benefit of the doubt on some claims that otherwise would not pass muster in a civil courtroom.

Summary in 50 Words or Less: In awarding restitution from a hit and run (Vehicle Code § 20001(a)), the judge may only award losses caused as a result of defendant’s crime, which would be the leaving the scene, not the collision itself.

When a criminal judge is strict on requiring that the victim proves causation, the judge is seen as being soft on crime.  No judge wants to be so perceived.

The hit-and-run case of Dennis Terry Martinez, however, pushed the judge to the limit on this issue.  Mr. Martinez was driving his pickup truck in San Bernardino during the early evening hours of April 26, 2012, when he was involved in a collision with a 12-year-old boy riding on a scooter.

Mr. Martinez stopped his truck and checked on the boy, who was seriously injured.  The boy’s mother then rushed to the scene.  When the mom arrived, Martinez left the scene.  As it turned out, Martinez was driving without a license and was on felony probation.  The boy suffered multiple facial fractures, a fractured clavicle and was diagnosed with a traumatic brain injury.  He spent nine days in the hospital before being transferred to a rehabilitation center. 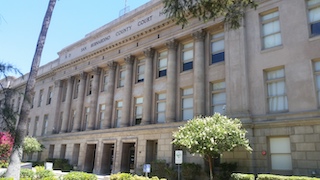 Old San Bernardino Courthouse
Martinez was later arrested and charged with felony leaving the scene of an injury accident (Vehicle Code § 20001(a)).  He pled guilty and was sentenced to three years in state prison.

The police report reported that the victim hit defendant’s truck when the victim failed to stop on his scooter.  The trial court made no findings concerning defendant’s responsibility for the accident.

Several months after the accident, the trial court considered whether Martinez could be ordered to pay restitution for the medical costs that the boy suffered as a result of the collision.  The trial court answered the question in the affirmative, relying on People v. Rubics (2006) 136 Cal.App.4th 452.  In Rubics, the Court of Appeal upheld a direct restitution award of $44,414 in funeral expenses against a defendant convicted of leaving the scene of an accident that resulted in the victim’s death.  After this ruling, Martinez entered into an agreement to pay $425,654.63 in restitution.

Martinez then appealed and the Court of Appeal reversed, concluding the trial court erred because “the gravamen of a section 20001 offense . . . is not the initial injury of the victim, but leaving the scene without presenting identification or rendering aid.”  People v. Escobar (1991) 235 Cal.App.3d 1504, 1509.  The Court of Appeal disagreed with Rubics, characterizing it as an anomaly in an otherwise unbroken line of cases stretching back 50 years that have characterized the offense in the same manner.  The Court of Appeal also noted that the trial court lacked the power to order restitution for injuries caused by the accident itself because defendant was not convicted of any offense involving responsibility for the actual accident and no factual determination of his responsibility for the collision or the injuries had been made.

The People then appealed to the California Supreme Court and lost in People v. Dennis Terry Martinez (2017 DJDAR 4779).  The Supreme Court affirmed the Court of Appeal, noting that under the California Constitution, as amended in 1982 by Proposition 8 (commonly known as The Victims’ Bill of Rights), every crime victim has a right to be compensated by the defendant for losses incurred as a result of defendant’s crime (Cal. Const., art. I, § 28, subd. (b)(13)).

In violating Vehicle Code § 20001(a), the “act made criminal” under the statute “is not the hitting, but the running.”  People v. Valdez (2010) 189 Cal.App.4th 82, at 84.  In other words, the accident is a condition precedent to the imposition of a duty to stop, provide identification and render aid.  Nor is any degree of fault required for the accident.  A defendant who flees the injury accident has committed a crime even the accident was solely the result of the victim’s own negligence.  California v. Byers (1971) 402 U.S. 424, 431 (rejecting argument that a driver’s disclosure obligations under California’s hit-and-run statute create a substantial risk of self-incrimination in violation of the Fifth Amendment).

We appreciate this opinion on many levels, but mostly for the suggestion that it is prudent for defendant to carefully avoid any admission of fault for the collision, but instead to narrow the scope of his or her liability to only leaving the scene without providing information or aid.
The citation for the California Supreme Court ruling discussed above is People v. Dennis Terry Martinez (2017) 2 Cal.5th 1093, 218 Cal. Rptr. 3d 140, 394 P.3d 1066.
For more information about restitution, please click on the following articles:
Contact us.
Serving Torrance, Long Beach, Compton, Airport Courthouses and Other Courthouses.