Home
Other Information
Criminal Defense Articles
In Vandalism, Does Restitution Include Investigative Costs?

In Vandalism, Does Restitution Include Investigative Costs?

In 2011 in Lancaster, California, Luis M., a juvenile, was arrested for allegedly committing vandalism.  The alleged damage was over $400, a violation of Penal Code § 594 (a) (“Felony Vandalism”).  The petition filed in court alleged that Luis M. placed graffiti on walls, signs, electrical boxes and metal boxes belonging to Clear Skies Mobile Home Park in Lancaster.

Brief Synopsis:  Restitution in a vandalism case can possibly include investigative costs, but the victim must show some rational basis for the costs and that such costs were attributable to the specific case at issue.  In the following case summary, the victim (a city) did not do this and the restitution award was vacated.

Luis M. later entered into a plea bargain wherein he was placed on deferred entry of judgment (DEJ) probation for twelve to thirty-six months under Welfare and Institutions Code § 790.  As part of the plea bargain, Luis M. was also ordered to pay restitution for the damage he caused.

At the restitution hearing, a police officer from the City of Lancaster testified that, using a “restitution model,” he determined that the amount Luis M. owed was $3,881.88.  The trial court, Judge Benny C. Osorio, accepted this amount as proper and ordered Luis M. to pay this amount. 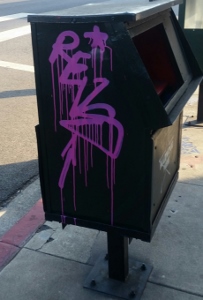 Luis M. appealed this order by filing a writ of mandate to the Second Appellate District.  Luis M. argued that he could not be ordered to pay restitution first because there was no appealable judgment (Luis M. was “awarded” deferred entry of judgment under Welfare and Institutions Code § 790, which means that if the juvenile performs satisfactorily, the underlying petition is dismissed and the court records are sealed).
The Second Appellate District, in Luis M. v. The Los Angeles Superior Court (2012) 210 Cal.App.4th 982, 148 Cal. Rptr. 3d 795 (2012 DJDAR 15097) reviewed the trial court’s ruling using the “abuse of discretion” standard.  The court noted first that great deference is afforded a restitution award amount because “a victim’s restitution right is to be broadly and liberally construed.”

Indeed, our experience in challenging any prosecution evidence offered at a restitution hearing is usually met with disfavor from the judge.  For example, we may argue that the expenses were not related to our client and the judge patiently listens to us, but rules in favor of the victim.  The court often views such hearings as one-sided affairs.  If a defendant challenges any amount or testimony, the judge is usually surprised and inclined to overrule any such objection.  This obviously can be frustrating when it is clear that the victim is seeking a windfall and exaggerating expenses to a sympathetic judge who may be inclined to grant such an award as really only further punishment to defendant.

The appellate court in Luis M. surprisingly noted that there must be some “factual and rational basis” for the award.  In re Johnny M. (2002) 100 Cal. App. 4th 1128, 1132.  In this regard, Welfare and Institutions Code § 730.6 (b) requires that the amount ordered “shall be of a dollar amount sufficiently to reimburse the victim… for all determined economic loss… as a result of the minor’s conduct.”  The purpose is to make the victim whole (Penal Code § 1202.4 is the statue governing restitution amounts for adults).

Turning to the trial court’s award of $3,881.88, the appellate court found it was too high. The City of Lancaster, after all, included in the sum law enforcement costs.  These were not attributable to the losses of the mobile home park.  Indeed, the Lancaster Sheriff’s Department was not a direct victim of Luis M.’s graffiti.

Consequently, the appellate court granted the writ of mandate.  It ordered that the lower court, the juvenile court, vacate its restitution order and hold a new restitution hearing with more testimony as to any investigative costs that were directly related to Luis M.’s alleged vandalism.