Home
Other Information
Criminal Defense Articles
What Is Vandalism and Graffiti (PC 594)?

What Is Vandalism and Graffiti (PC 594)?

California Penal Code § 594 defines vandalism as defacing another’s property with graffiti “or other inscribed material,” or damaging or destroying another’s property.  To be convicted of violating section 594, one must commit the act maliciously, which means with the intent to annoy or injure another person.  Accidental conduct certainly does not qualify. 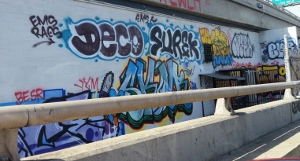 If probation is granted, the judge can order the defendant to counseling services and community service, including cleaning or repairing the same property defendant damaged.

If one has two prior vandalism convictions and one was either incarcerated or placed on probation is at least one of the prior cases, the court must sentence defendant to jail (if a misdemeanor) or prison (if a felony).

When the vandalism is on or near a highway or freeway, the charge is for a violation of Penal Code § 640.7 (highways) or § 640.8 (freeways).  For a first offense, the maximum jail term is six months.  For a second offense, it is one year in county jail, as well as a maximum $1,000 fine for damage to a highway and $5,000 for damage to a freeway.  With either type of violation, graffiti removal or counseling is also usually ordered.

Sometimes, police even single out a person to wrongfully arrest, in which case defendant may want to file a Pitchess Motion to examine the officer’s personnel record to see if he or she has a prior history of making false arrests, coercing admissions, racial profiling or fabricating facts on a police report.

Second, and less common, is the accident defense.  This applies when one does not mean to damage another’s property, one cannot act with malice.  However, one can still be charged with trespass (Penal Code § 602).