Home
Other Information
Criminal Defense Articles
Why Won’t the Police Give Me a Copy of the Police Report?

A regular topic in every criminal case we handle is how quickly our office can get the police report so that the client can be made aware of what witnesses and perhaps the victim (if there is one) told police.  The client is anxious to know how police described the crime and whether police realized certain things.  The client, in other words, feels vulnerable to a police officer who may have been rude or suspiciously nice.

The Gist of this Article: Police often refuse to provide a copy of the police report upon its request because the identities of witnesses or victims in it could serve as a roadmap or checklist for the defendant to intimidate such witnesses, or even kill them, to prevent a conviction.  It also could lead to the destruction of evidence.

The unspoken implication from our client is concern that the officer may stretch the truth or take poetic liberties in the report.  The client consequently wants either reassurance that this did not take place or confirmation that the officer did not like our client.  It can decrease anxiety to the client if he or she knows the officer was accurate or, paradoxically, also lower anxiety if the client knows the officer lied in the report (and if so, the client may want to preserve witness memories through declarations rebutting the police report).
Other times, the client may also have been emotionally stressed out or very drunk and is curious to know “what really happened.”
Sometimes, the client suggests that the first big test of an attorney’s value is whether he or she can get the police report. 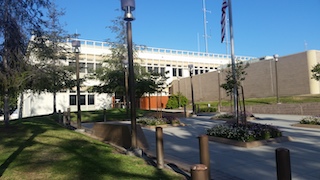 Torrance Police Station
The California Public Records Act (CPRA) provides that, except as “exempted by law,” public records must be made available to the public to look at (for inspection).  This is provided for at California Government Code § 6253(a).  The CPRA is similar to and in fact modeled after the federal Freedom of Information Act (FOIA).  The CPRA’s provisions later found their way into the California Constitution at Article I, Section 3(b), which provides a public right of “access to information concerning the conduct of the people’s business.”
These provisions sound lofty and reassuring, but there is no standard procedure for obtaining California public records, which a police report may qualify under.  Procedures vary from agency to agency, from county to county, from city to city and even within each city.
A public record includes, under Government Code § 6252(e), any record “kept by an officer because it is necessary or convenient to the discharge of his official duty.”  California State Univ. Fresno Assn’n v. Superior Court (2001) 90 Cal.App.4th 810, 824.
Government Code § 6254(f), which is part of the CPRA, exempts a large amount of police records from disclosure, such as records of complaints (of excessive force, racial profiling, evidence tampering, coerced confessions), investigations, intelligence information (i.e. wiretaps, identity of confidential informants) and security procedures.
In other words, unless “disclosure . . . would endanger the safety of a person involved in an investigation or . . . the successful completion of the investigation or a related investigation,” law enforcement agencies “shall make public the following information about individuals the agency has arrested (Government Code § 6254(f)(1)):
Law enforcement is also obligated under Government Code § 6254(f)(2)(A) to disclose:
We find that asking for “the police report” is too broad for some police departments to handle and that asking for specific information, as stated above results in a response more quickly.
Police will further seek to protect all third-party witnesses from being identified so as to prevent the recipient of the report from engaging in witness intimidation or witness tampering, especially when police anticipate further investigation.
Consequently, police often defer to releasing the report only at the arraignment to a criminal defense attorney representing the accused.  This can be frustrating to our clients.