In Brady v. Maryland (1963) 373 U.S. 83, the U.S. Supreme Court held that prosecutors are constitutionally obligated to disclose “evidence favorable to an accused… [that] is material either to guilt or to punishment.”

Condensed Version:  Conviction for Aiding and Abetting Murder Reversed When Prosecution Fails to Disclose that Key Witness Has Theft Conviction and Gang Affiliations.

This duty is based on the Fourteenth Amendment, which instructs that the states shall not “deprive any person of life, liberty, or property without due process of law.”  The purpose of Brady is to ensure “that criminal trials are fair.” Brady, at 87.  In considering Brady, the U.S. Supreme Court said that this burden on prosecutors to disclose information “illustrates the special role played by the American prosecutor in the search for truth in criminal trials.”  Strickler v. Greene (1999) 527 U.S. 263.

Put another way, the prosecution is trusted to turn over evidence to the defense because its interest “is not that it shall win a case, but that justice shall be done.” Srickler, supra (quoting Berger v. United States (1935) 295 U.S. 78, 88). 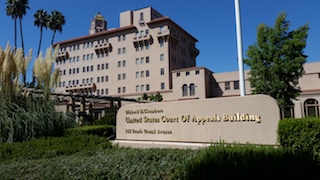 U.S. Ninth Circuit Court of Appeals Pasadena
Favorable evidence includes evidence that impeaches a prosecution witness. Giglio v. United States (1972) 405 U.S. 150 (new trial ordered when government failed to inform the defense that a prosecution witness testified in exchange for a promise by the prosecution that he would not be prosecuted).  The Supreme Court has since ruled that the prosecution must disclose all material impeachment evidence about all witnesses. United States v. Bagley (1985) 473 U.S. 667, 676.
The 1997 case of Randall Amado put these standards to the test.  Not until July 11, 2014 was the prosecutorial misconduct corrected with a reversal of Mr. Amado’s 1998 conviction for aiding and abetting a murder, as well as other lesser offenses.

As the bus passed through this area, some members of the Bounty Hunter Bloods that were on the bus taunted Crips members standing at the bus stops.  One day, the Crips decided to respond.  At least five Crips boarded the bus and opened fire.  One person died.

Amado was indicted on charges of first degree murder and assault with a firearm, as well as aiding and abetting the murder by surrounding the bus and carrying a gun to the scene, as well as other offenses.

One of the key prosecution witnesses was Warren Hardy.  Amado was convicted.  He was then sentenced to 27 years to life in prison.

After the verdict, Amado’s lawyer obtained a copy of Hardy’s probation report, which the prosecution never produced.  The report revealed that he was a member of an affiliated Bloods gang, the Piru Bloods, related to the same gang as the victim.  It therefore seemed obvious that he had the potential to be biased.  Hardy was also on felony probation for robbery, a crime of dishonesty that is certainly relevant toward his ability to be truthful.

Amado thus asked for a new trial, under Penal Code § 1181(8) based on this Brady violation.  The U.S. Court of Appeals for the Ninth Circuit (2014 DJDAR 9154), in Randall Amado v. Terri Gonzalez Warden, ruled in Amado’s favor.

The Ninth Circuit noted that the information in the probation report was not the type of information that the defense could easily obtain its own.  Moreover, Hardy was the only witness who testified that Amado brought a weapon to the scene.  Thus, it was critical to Amado’s conviction.

The Ninth Circuit further noted that nothing in the record suggested that defense counsel knew before or during trial, or otherwise reasonably had available to him, the key evidence that the prosecutor had failed to disclose.  Moreover, the prosecutor must presume in favor of disclosure, and resolve doubts about the exculpatory nature in favor of providing it. United States v. Agurs (1976) 427 U.S. 97, 108 (ruling that the “prudent prosecutor will resolve doubtful questions in favor of disclosure.”).  There is no requirement that defendants “scavenge” for hints of undisclosed Brady material when the prosecution represents that all such material has been disclosed.”  Agurs, supra.

Consequently, the Ninth Circuit found the prosecution’s failure to disclose such material impeachment evidence had violated Amado’s right to due process under Brady and the verdict was reversed.  The case was remanded with instructions to release Amado from custody, unless the District Attorney immediately filed a new criminal complaint against Amado, which we believe was unlikely given the passage of time and how memories fade and evidence is lost or even destroyed.
The citation for the Ninth Circuit ruling discussed above is Amado v. Gonzalez (9th Cir., 2014) 758 F.3d 1119.
For more information about discovery obligations of the prosecutor, click on the following articles:
Contact Greg Hill & Associates