Home
Other Information
Criminal Defense Articles
Why Are Prostitution Cases Being Seen As Human Trafficking?

Why Are Prostitution Cases Being Seen As Human Trafficking?

If you were recently cited for solicitation of prostitution or loitering for purposes of prostitution, be prepared for a tough prosecutor who may believe she or he is combating human trafficking by ensuring your case is handled with a heavy hand.  Why is this happening?
In 2017, the U.S. Department of Labor estimated that 21 million people worldwide are victims of human trafficking.  Such operations generate hundreds of billions of dollars in profits by trapping not only women and children, but men as well, in forced labor and commercial sexual exploitation.  It is estimated that annual profits exceed $150 billion per year worldwide.

About This Article Briefly: Recently (2018 and later), prostitution cases have been seen more in the context as links in the chain of human trafficking, so prosecution of prostitution cases is more serious and aggressive, with prosecutors seeking convictions on even first-time offenses, rather than offering diversion as had historically been the approach.

Human traffickers use deception, threats, violence and even force to continue their operations, as there is a strong profit motive.
Within the United States and California in particular, we’d like to think that human trafficking does not exist, but this would be wishful thinking.  In fact, with the Trump administration’s anti-immigrant posture, human traffickers may have more power in silencing victims who seek to escape.  There are many documentaries that personalize the problem, telling the horrific stories of those who have escaped such modern-day slavery.
Yet many of the children involved in human trafficking are U.S. citizens who fled an abusive home environment, desperately taking to the streets for a better life, only to become prostitutes under control of a manipulative and violent pimp who may be associated with a criminal street gang. 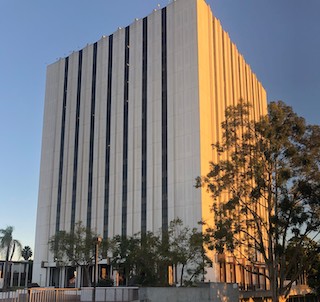 Compton Courthouse
By some estimates, up to 300,000 Americans under the age of 18 are lured into the commercial sex trade each year and this number continues to rise.  Consequently, it is no surprise that Los Angeles and Orange County prosecutors view anyone associated with the solicitation of prostitution (Penal Code § 647(b)) or loitering for purposes of prostitution (Penal Code § 653.22) as potentially fueling this trend.
Years ago, someone cited for solicitation of prostitution on a first-time offense could expect a slap on the wrist.  In some cases, one merely needed to attend a short course on prevention of prostitution and be tested for HIV / AIDS to earn a dismissal.
Rising awareness of human trafficking has made such perfunctory punishment ancient history.  Now prosecutors look closer at a solicitation of prostitution ticket issued along Long Beach Boulevard in Compton, Beach Boulevard in Anaheim, Sepulveda Boulevard in Van Nuys, Holt Avenue in Pomona, Atlantic Avenue in Cudahy, and other locations.  Now, local police have developed information on criminal street gangs who promote human trafficking and Asian massage parlors, motels, hotels, truck stops and even restaurants where victims often provide labor to “work off” a debt to their employer.  Even high-end hotels are involved.
The local police often coordinate “liberation” efforts with the FBI, who then direct victims toward services helpful in obtain restraining or protective orders against their captors and obtaining T or U visas to remain in the United States.  Such services often also include substance abuse counseling and integrating children victims into the state’s child welfare system.  Most fundamentally, such services include helping such victims obtain birth certificates, passports, social security cards or other identification that the slave’s “boss” confiscated at some point to prevent escape.
This awareness has led to January being proclaimed human trafficking awareness month.  The Los Angeles District Attorney’s office is keen to report increased arrests for prostitution and solicitation of prostitution to the FBI.  Our office has noticed a shift in focus toward obtaining convictions for 647(b), rather than affording diversion.
With the increased use of the Internet by the public and sex traffickers, police have also used the Internet to find those supporting the human trafficking industry.  It has been reported that 86% of child trafficking occurs through a variety of social media websites (source – Trial Lawyer magazine, Fall, 2018, “Help Stop Human Trafficking Through Civil Litigation,” by Kimberly Adams, et al.).  Backpage.com was one of those websites, whose ads were not too subtle about minors being involved, often describing “escorts” as “innocent,” “young,” “amber alert,” or “daddy’s little girl.”  Our office represented a gentleman who responded to one of these advertisements posted by police, who told him the “escort” was only 15 and he proceeded to try to meet her, only to be arrested.
While Backpage was shutdown by the federal government, Craigslist, Facebook and others continue to operate and escape liability.
Therefore, the prosecution of those cited or even arrested for 647(b) or 653.22 will continue to be punishing, rather than lenient.
For more information about prostitution, please click on the following articles:
Contact us.
Serving Torrance, Long Beach, Compton, Airport Courthouses and Other Courthouses.