Home
Other Information
Criminal Defense Articles
What Punishment for Charge of Solicitation or Prostitution?

What Punishment for Charge of Solicitation or Prostitution?

The punishment one faces for solicitation of prostitution, actually engaging in sexual conduct with a prostitute for pay or merely agreeing to engage in an act of prostitution is rarely as harsh or damaging as the social stigma, employment consequences or, while rare, residency ramifications.  The police may also seize one’s car and file a petition for forfeiture of the car, if the offense is committed in one’s car in Los Angeles.

For a first offense, the punishment one faces in court is very minimal, relatively moderate for a second offense and fairly tough on a third offense.

On a first offense, the statutory maximum punishment is six months in county jail and/or up to $1,000 in fines, plus penalties and assessments.  In our experience, this almost never occurs.  Instead, the client is often offered a form of diversion wherein he or she takes a one day course on the dangers of prostitution and has an AIDS/HIV test performed.  The test results are then placed in a sealed envelope and given to the client to give to the judge.  The client also receives a proof of completion document upon completion of the course.  When he or she does both these things, the case is dismissed. 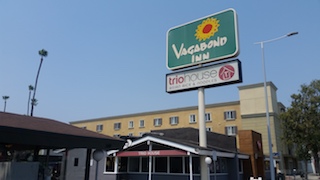 Vagabond Inn
While each court is different in how it handles first time offenses, the generally lenient if not empathetic approach is consistent.  For example, the Compton Courthouse, we have found, is different from the East Los Angeles Courthouse, which differs from the Long Beach courthouse.  It is wise to understand, too, that as supervising district attorneys change, policies change, too, as we have experienced.
It should be noted here that the “PDP,” or prostitution diversion program, is not cheap.  It costs approximately $700 for a one-day class.  In addition, some courts now require the client to perform community labor, which is quite unpleasant as compared to community service.

On a second-time offense, the judge will sentence the client to a minimum of forty-five days in county jail.  This obviously can cause big problems with one’s employment and marriage, especially if the spouse was unaware of the first offense.  A client facing a first-time offense can often hide the incident from his or her spouse, but this is difficult with a second-time offense.

On a third-time offense, the judge must order that the client serve a minimum of ninety days in county jail.  The collateral damage from this can have permanent effects.

With a first-time, second-time and a third-time offense, the court may suspend one’s driver’s license for up to thirty days and order that the client have only a restricted license for six months.  The judge has discretion to do this if the client committed the offense while using his or her car and this happened within 1,000 feet from a residence.  The important thing to emphasize about this provision is that it is discretionary.  The court does not have to impose such punishment and in our experience, rarely does so.

Perhaps the biggest concern of clients who face charges or violating Penal Code § 647(b) is whether they will need to register as a sex offender under Penal Code § 290.  It is not required.  However, the judge has discretion to impose such a lifetime registration requirement if the judge finds that the client engaged in (or agreed to engage in or solicited another to engage in) prostitution “as a result of sexual compulsion or for sexual gratification.”

While our office has handled perhaps over one-hundred prostitution cases over the years, we have never seen a judge order anyone convicted of Penal Code § 647(b) to register as a sex offender.  Rhetorically speaking, as an aside, we think that a judge’s power to impose such a lifetime registration requirement is too broad.  Most, if not all, men – and females - who engage in prostitution-related activities do so for sexual gratification.  It is reassuring to know our judiciary has not imposed this requirement, although it would seem quite easy to do.