What to Take Away:  Solicitation of prostitution (Penal Code § 647(b)) is committed when one gives another person money “in the context of one’s overt actions” such that the money is tendered in exchange for sexual favors, as the following case exemplifies with a police officer.

While Officer Mecano and Taylor P. were alone in a patrol car, Officer Mecano told her that her boyfriend was not good enough for her.  Mecano told Taylor P. that she should be treated better.  He then asked her, Taylor P. said in a “flirting kind of way,” where she lived and how he could find her.  Officer Mecano then said that he would “wine and dine her” and treat her right.  Mecano also told her she was beautiful.  Lastly, he said he wanted to be with her. 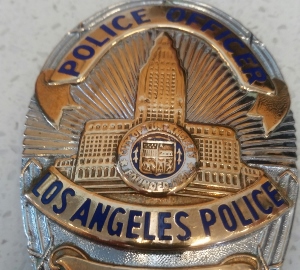 LAPD Badge
Officer Mecano then booked her and released her on her own recognizance.  Officer Mecano then ordered a cab for her and gave her $200.  He told the cab to take her to a nearby Holiday Inn.  He told Taylor P. to get a room, take a shower and wait for him.  Lastly, he told Taylor P., that he would be “fucking pissed” if she “burned him for the money.”
Once the cab came, Taylor P. got in, but told the cab driver to take her to the beach, not the nearby Holiday Inn.

Officer Mecano then called the taxicab company four times to ask for the final destination of the taxi.  In the meantime, Taylor P. went to the police and described what Mecano had told her to do and that he had given her $200.  Taylor P. said she was scared.

In a separate incident, perhaps charged to show his modus operandi, Officer Mecano also arrested Alexandra H., then 18, at Pacific Palisades Park for smoking marijuana.  He then asked Alexandra is she would “hook up” with him if he let her go.  Terrified, she said maybe.  He then suggested that she meet him at the Holiday Inn when he got off his shift at 6:00 a.m.  He then demanded her phone number, which she provided to Officer Mecano.  Officer Mecano then let Alexandra H. leave without citing her.

On March 14, 2011, Los Angeles Superior Court jury found Officer Mecano guilty of misdemeanor solicitation of prostitution (Penal Code § 647(b)) as to Taylor P. and other charges relating to Alexandra H.  This article will not address the issue regarding Alexandra H.

Mecano appealed his conviction for solicitation of prostitution, arguing, that because there was no explicit request for sex in exchange for money, he did not violate Penal Code § 647(b).

The Second Appellate District, in People v. Russell Mecano (2013 DJDAR 3853), affirmed the conviction.  The Court of Appeals held that Mecano’s statements to Taylor P., “placed in context and coupled with his overt actions, constituted sufficient evidence of the crime.”

The Court of Appeal explained that the standard it had to apply was whether the whole record could lead any rational trier of fact (jury) to find the essential elements of the crime beyond a reasonable doubt.  Here, the court sarcastically said, a verbal offer or written offer to exchange money for sex is not required, or else prostitutes “would immediately enroll in sign language courses.”  Likewise, the words “dollars” and “sex” need not be communicated, as prostitutes use a multitude of slang words (“roses,” “everything’” “BJ”) to communicate such intentions.

While the reader of this case may take satisfaction in reading about a police officer being convicted, the case highlights the difficulty of common defenses to prostitution.  Our office has had success negotiating such cases based on the ambiguity of the communication between our client and the police decoy.  This case seems to undercut such common defenses for the future.
The citation for the Second Appellate District Court ruling discussed above is People v. Russell Mecano (2d App. Dist., 2013) 214 Cal.App.4th 1061.
For more information about prostitution and sex offenses in general, click on the following articles:
Contact Greg Hill & Associates