Our client, age 24, was trying to think of a way to break up with his girlfriend, age 21.  He realized she was not very serious about their relationship, as she constantly flirted with other guys and let them buy her drinks at bars, even when she went there with our client.  She was very beautiful, which attracted the attention of many guys.
One day, in August, our client was in his apartment in Whittier when his girlfriend called him up and asked if he wanted to hang out at the apartment pool with her and enjoy the sun.  Our client lived with his single mom, helping her out after her divorce.

In a Nutshell:  Domestic violence case by ex-girlfriend against our client in the Whittier courthouse dismissed on Serna motion based on delay in prosecution of 18 months and actual prejudice shown.

Our client agreed, hoping to get out of the apartment with his mom and to get a better idea if he ought to terminate his relationship with his girlfriend or continue.
The pool in his apartment complex was a gathering point for many young people in the area, even those who did not live at the apartment complex.  People would drink beer there and make mixed drinks and really enjoy themselves.
Our client’s girlfriend showed up to our client’s apartment and the two went down to the pool to lay out and enjoy the sun.  Several other guys came up to talk to our client’s girlfriend and it became quite obvious to our client that she knew such guys well from how they talked.
Our client abruptly got up and went back to the apartment, leaving his girlfriend by the pool.  He was angry at her and angry at himself for feeling jealous.
After a few minutes in the apartment, his girlfriend came back to the apartment, suspecting that our client was upset.  He told her he indeed was upset and that he wanted to break up.
The girlfriend protested that our client misinterpreted her talking with other guys and that she really like our client only.  Our client called her a liar and told her to leave.  Surprisingly, his girlfriend argued only a little, calling him an idiot and cheap.  The client’s mom heard the whole argument.
About two hours later, our client heard loud knocking on his apartment door.  It was the Whittier police department.  They asked for our client and promptly arrested him on charges of domestic violence. 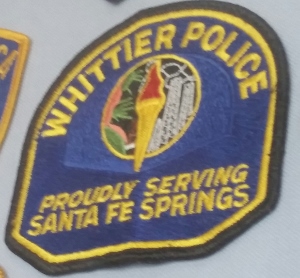 Our client was taken to the Whittier Police Station and booked on one count of felony domestic violence.  He was told his girlfriend had facial injuries because he had punched her in the face and she fell backwards onto a couch.
Our client explained that this was untrue and that his mom witnessed the argument he had with his girlfriend when he broke up with her.  Police responded, “well, you can tell that to the judge.”
Our client then posted bail and was released, but without being told any hearing date to report back to court, which is unusual.
Eighteen months later, he was stopped at a red light and a police officer pulled behind him.  The officer then instructed him to pull over, using the vehicle public address system.  The officer explained that he had run the vehicle’s license plate and read who the owner was.  The computer told him that the owner had a misdemeanor bench warrant out of the Whittier Courthouse for domestic violence.
Our client was respectfully advised to report to the Whittier Courthouse and left to drive home.
The client then called Greg Hill & Associates and explained what had happened.  Greg quickly spotted the Sixth Amendment issue of deprivation of the defendant’s right to a speedy trial.  Greg explained what this right was and how he would attempt to have the case dismissed on a motion to dismiss, as authorized under the United States Constitution, Amendments VI and XIV, and under the California Constitution, Article I, section 13, as well as Serna v. Superior Court (1985) 40 Cal.3d 239.
Greg then appeared in the Whittier Superior Court with the client two days later and had the bench warrant recalled.  In reviewing the discovery from the prosecution, Greg found that the alleged victim went to the emergency room after the incident and while there, told medical personnel that “injured her face after falling down when she tripped on the stairs at her boyfriend’s apartment.”  The emergency room records also reported that the ex-girlfriend was drunk.
Greg then assembled a “Serna motion,” and filed it in the Whittier Superior Court.  The judge granted the motion, which made our client very happy.

For more information about the right to a speedy trial, click on the following articles:
Watch our Video about Domestic Violence by clicking here.
Contact us.
Serving Torrance, Long Beach, Compton, Airport Courthouses and Other Courthouses.