Home
Other Information
Criminal Defense Articles
When May Police Search a Cellphone in an Inventory Search?

When May Police Search a Cellphone in an Inventory Search?

Before towing or impounding a vehicle, offices may seize and inventory the contents of the vehicle in order to avoid liability for missing items.  South Dakota v. Opperman (1976) 428 U.S. 364, 369.  If performed according to standardized criteria and not in “bad faith for the sole purpose of investigation,” police inventory procedures will satisfy the Fourth Amendment.  Colorado v. Bertine (1987) 479 U.S. 367, 372.  In other words, if the “inventory” includes a bit of a search, that search is legal as long as it does not exceed what it necessary for inventory purposes only.

Summary in 50 Words or Less: Police may search a cellphone during an inventory search, even when police do not conduct the search in accordance with the police department inventory search protocol or guidelines, as long as police do not use the inventory search exception to conduct a search far deeper than just inventorying items.  In the following, the phone was lawfully seized, so it could be searched via a warrant for the cell phone contents.

It is against this U.S. Supreme Court law that the police conduct in San Bernardino County was evaluated in the case of Nahach Manuel Garay, aka Nahach Guerrero, aka Polar Bear.
In March of 2017, San Bernardino County deputy sheriffs tried to stop Garay for a traffic violation.  Garay, with a passenger in his car (a rental car), then led the sheriffs on a high-speed chase, ending in Garay crashing the car into a ditch and attempting to run away.  When caught, he was patted down by officers, who found thousands of dollars in cash in his pockets and four different illegal drugs.
Officers then had to pull Garay’s car out the ditch and have it towed.  In preparation for the towing, they searched the interior of the car, finding two loaded rifles, ammunition and two cell phones, one of which was claimed by Garay’s passenger.
To search the contents of the cell phones (they did not just hand over the cell phone to Garay’s passenger when he claimed it was his), the sheriffs obtained a search warrant based on an affidavit describing the circumstances leading up to the discovery of the phones, including the discovery of cash and drugs.  The affidavits stated that based on the officers’ experience, ex-felons (like Garay) often used cell phones to coordinate the sale and buying of guns and drugs.
The search of the car was performed without any inventory sheet listing the property found inside the car, which was a list required under the sheriff’s department inventory policy. 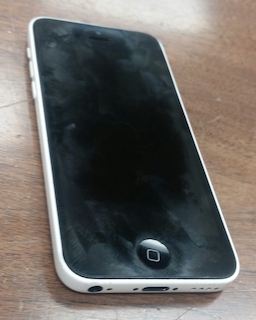 Cell Phone
Garay was then prosecuted in U.S. District Court and convicted under 18 U.S.C. § 922(g)(1) as a felon in possession of a firearm.  He filed a motion to suppress evidence found as a result of a search of his cell phone.  That motion was denied.  The trial court judge ruled that the phone was lawfully seized in an inventory search of the car and that the warrants authorizing the search of the phone’s contents were supported by probable cause.
After his conviction, he appealed his conviction to the U.S. Ninth Circuit Court of Appeals in Pasadena, arguing that the warrantless seizure of his phone was unreasonable and that the affidavits supporting the search of his phone were inadequate.
The government’s argument was two-fold.  First, it argued that regardless of whether the inventory search was proper, Garay lacked standing to challenge the search of the phone because he had abandoned any reasonable expectation of privacy in its contents when he ran from the car.  Second, it argued that the sheriff’s department internal policies do not define constitutional rights and that the officers were merely removing and safeguarding the contents of a wrecked car before it was towed away.
The Ninth U.S. Circuit Court of Appeals did not address the People’s argument that Garay lacked standing to challenge the search after he had abandoned the property.  Instead, it focused on the lack of an inventory sheet as suggesting the police did not conduct an inventory search according to their internal policies and therefore, the search was invalid.
As to this point, the Ninth Circuit cited to United States v. Rowland (8th Cir., 2003) 341 F.3d 774, 780 (quoting United States v. Marshall (8th Cir. 1993) 986 F.2d 1171, 1175), which explained that administrative errors should not, on their own, invalidate inventory searches: “There must be something else; something to suggest the police raised the ‘inventory search banner in an after-the-fact attempt to justify’ a simple investigative search for incriminating evidence.”
Here, they found no reason to conclude that the inventory search was used to rummage for evidence.  The district court, in other words, did not err in concluding that Garay’s cell phone was lawfully seized as part of a valid inventory search.
The citation for the U.S. Ninth Circuit Court of Appeals ruling discussed above is United States v. Nahach Manuel Garay (9th Cir., 2019) 938 F.3d 1108.
For more information about searching a cellphone, please click on the following articles:
Contact us.
Serving Torrance, Long Beach, Compton, Airport Courthouses and Other Courthouses.