Home
Other Information
Criminal Defense Articles
Do Police Need a Warrant to Search Your Cell Phone?

Do Police Need a Warrant to Search Your Cell Phone?

The law is supposed to reflect current societal expectations of decency, as well as technological realities.  In other words, the law can change.  It can expand rights and make new things illegal when, for example, public safety is endangered.

Why This Article Matters: The U.S. Supreme Court has now ruled that police must get a warrant before searching a suspect’s cell phone, although the exigent circumstances exception to a warrant remains applicable, the Court allowed, in narrow circumstances.

Our office thus applauds the recent U.S. Supreme Court ruling in Riley v. California, wherein our country’s highest court held that police may not search for digital information on a cell phone without a warrant.  This case concerned a person, Mr. David Leon Riley, who had been arrested.  The court did state there would remain an exigent circumstances exception, but this justification for a warrantless search was to be narrowly construed.
Mr. Riley was stopped for driving with expired registration tags.  Once he was stopped,  police determined that Riley’s license was suspended.  Pursuant to his police department policy, the police impounded the car. 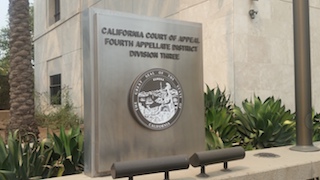 Fourth Appellate District CA Court of Appeals Santa Ana
Another officer conducted an inventory search of the car, finding two loaded firearms in the car’s hood area.  This was a violation of Penal Code §§12025(a)(1) and 12031(a)(1).
Riley was then arrested and, incident to the arrest, the officers found items associated with the “Bloods” street gang.  The officer also seized Riley’s cell phone from Riley’s pants pocket.  The officer noted that the phone was a “smart phone.”  The officer then started looking through it, finding the initials “CK,” a slang or street term for “Crips Killers,” which was consistent with the Bloods gang.  The initials were in texts and contact lists on the phone.
About two hours later, at the police station, a detective specializing in gangs further inspected the phone.  He found photographs of Riley standing in front of a car that police suspected had been involved in a shooting a few weeks earlier.
Riley was later charged with firing at an occupied vehicle, assault with a semiautomatic weapon and attempted murder.  The crimes were allegedly committed for the benefit of a criminal street gang, which carries with it a ten-year enhanced sentence.
Prior to trial, Riley made a motion to suppress all evidence the police seized from his cell phone.  He argued that the searches violated his Fourth Amendment right to be free of unreasonable search and seizure because the officers never obtained a warrant to search the phone.  He further argued that exigent circumstances did not justify the warrantless search.
The trial court denied Riley’s motion to suppress.  Riley then proceeded to trial.  At trial, the officers testified to what they saw on the phone during their warrantless search, including the videos of gang activities and photographs, too.
The jury convicted Riley of all crimes he was charged with and the judge sentenced him to fifteen years to life in prison.
Riley then appealed to the California Court of Appeal for the Fourth Appellate District.  The Court of appeal affirmed the trial court, relying upon People v. Diaz (2011) 51 Cal. 4th 84, 244 P. 3d. 501, which held that the Fourth Amendment allows a warrantless search of a cell phone incident to an arrest, as long as the cell phone was “immediately associated with the arrestee’s person.”Diaz, at 93, 244 P. 3d 505-506.
The California Supreme Court then affirmed the court of appeal and the trial court.  The U.S. Supreme Court then granted certiorari to hear the case.
The U.S. Supreme Court, Chief Justice John Roberts writing the opinion (2014 DJDAR 8220), began its analysis by noting from the outset that an officer may examine a cell phone to make sure it cannot be used as a weapon as well as to see if it shows evidence of an impending retaliatory attack of the officers by friends of the arrestee. See, e.g., Warden, Md. Penitentiary v. Hayden, 387 U.S. 294, 298-299.
The court then framed the issue as whether the new technology and the tremendous amount of information on a “smart phone” has caused a need to change established Fourth Amendment law on warrantless searches incident to an arrest.  The court answered this question in the affirmative.
To appreciate the gravity of this ruling, it is important to appreciate the context of the existing search and seizure law.  In Chimel v. California, 395 U.S. 752, the court allowed a warrantless search incident to an arrest to protect officer safety and to prevent the destruction of evidence.  In United States v. Robinson, 414 U.S. 218, the court extended the Chimel holding to allow the warrantless search of a cigarette pack.  In Robinson such a search revealed several heroin packets.
Therefore, with Riley, the issue became whether the warrantless search of a cellphone incident to an arrest was factually similar to the search of a cigarette pack.  The U.S. Supreme Court said absolutely not.  Chief Justice Roberts wisely characterized such an analogy as “like saying a ride on horseback is materially indistinguishable from a flight to the moon.  Both are ways of getting from point A to point B, but little else justifies lumping them together.”
Moreover, Roberts characterized smart phones as “minicomputers” that contain an individual’s “privacies of life.”  In addition, the cell phone can be considered a key to an enormous amount of information remotely accessible from the cloud, such as medical records, financial statements and romantic notes, folly for police seeking to manipulate an arrestee.
Roberts assured critics of this opinion that nowadays, a police officer can obtain a warrant within fifteen minutes in most situations and that police have technology that prevents a cell phone owner from “wiping” the phone to erase its contents.
The Supreme Court thus reversed the trial court and vacated the conviction of Mr. Riley.  We at Greg Hill & Associates are pleased with the opinion and look forward to how the courts will apply it, as it seems to be retroactive to pending cases and perhaps even those marked by arrests after Mr. Riley was arrested.
he citation for the United States Supreme Court ruling discussed above is Riley v. California (2014) 573 U.S. 373, 134 S. Ct. 2473, 189 L. Ed. 2d. 430.
For more information about criminal issues with cell phones, click on the following articles:
Contact Greg Hill & Associates
Serving Torrance, Long Beach, Compton, Airport Courthouses and Other Courthouses.