Home
Other Information
Criminal Defense Articles
When Is Evidence of Silence Not an Adoptive Admission?

When Is Evidence of Silence Not an Adoptive Admission?

People v. Jennings (1988) 46 Cal.3d 963, holds that “when a person makes a statement in the presence of a party to an action under circumstances that would normally call for a response if the statement were untrue [i.e. “I did not do that!”], the statement is admissible for the limited purpose of showing the party’s reaction to it.”
This specific holding falls under the general rule stated in Evidence Code § 1221 that “[e]vidence of a statement offered against a party is not made inadmissible by the hearsay rule if the statement is one of which the party, with knowledge of the content thereof, has by words or other conduct manifested his adoption of his belief in its truth.”  For example, it someone confronts a subject about a crime that just took place and the suspect says nothing, but looks down at the ground and then changes the subject, that reaction is an “adoptive admission.”

The Reader’s Digest Version: Evidence of silence is not an adoptive admission when there is an alternative explanation for the silence, as the following summary of a Fifth Circuit opinion explains in the case of text messages from a suspect’s mom to her son accusing him of a series of crimes, to which the suspect did not respond.

As one can imagine, there are certainly limits on this type of evidence and an aggressive prosecutor may try to introduce conduct as an adoptive admission that really may not be.
This was exemplified in the recent Fifth Appellate Court decision on an appeal from a verdict and sentence in Stanislaus Superior Court.  The case was People v. David Lee McDaniel, III (2019 DJDAR 7910).
Between June 7, 2014 and October 19, 2014, there were six robberies at varies stores in Patterson (a Papa Murphy’s Take & Bake Pizza, a McDonald’s, a CVS, a MetroPCS and an AutoZone) and Westley (a Subway).  Police believed the same suspect committed all six of the robberies, although the surveillance videos in each of the stores were not very clear and a clear identification of the suspect was obscured.
Police provided details to the public and asked for help.  A citizen contacted the police and named David Lee McDaniel, III, as “a possible suspect.”  The police also received reports of other suspects. 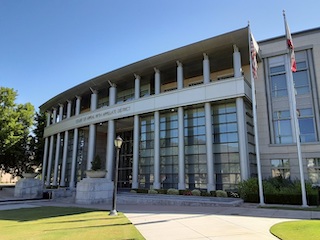 Fifth District Court of Appeal Fresno
Police then obtained a search warrant for McDaniel’s’ house and vehicle.  The executed the warrant and found a duffel bag, a satin bag, a black beanie and a black mechanic-style glove similar to materials used in the robberies.  McDaniel was then arrested.
McDaniel was ultimately charged with ten counts of robbery (Penal Code § 211).  The information included allegations of two prior convictions under Penal Code § 211 from 2003 and two prior convictions for a serious felony.  So the pending case would, if McDaniel was convicted of even one robbery of the ten, would be a third strike.
The prosecution pinned the case on McDaniel based on analysis of his cell phone text messages.  In one exchange on September 10, 2014, his mother accused him of robbing the stores in Patterson and Westley.  McDaniel did not respond to this accusation by texting his mother back to deny her accusation that he had committed several local robberies.  The prosecution argued that this was an adoptive admission of committing the crimes.
McDaniel filed a motion in limine to exclude the text message exchange and the trial court judge denied the motion.
The jury then convicted McDaniel of nine of the ten robberies and the judge sentenced him under the Three Strikes Law, due to his two prior strikes, to a sentence of 150 years to life in state prison.
McDaniel appealed the verdict and sentencing on many grounds, but this article will just focus on his argument that the trial court judge erred in admitting the text message exchange as an adoptive admission.
The Fifth Appellate District agreed with McDaniel and reversed the verdict.
The appellate court started its analysis by reminding the reader that the proponent of evidence of a purported adoptive admission must establish that the statement was made under circumstances that would normally call for a response if the statement were untrue.  People v. Riel (2000) 22 Cal.4th 1153, 1189.
The court also, to lay a basis for its reversal, went way back to People v. Wilson (1965) 238 Cal.App.2d 447 for a primer on adoptive admissions analysis, stating that accusatory statements are, after all, plain hearsay.  They may only make their way into evidence as an admission if the accused “stands mute in the face of the accusation or responds with an evasive or equivocal replay.  In that situation,” the judge “under certain circumstance” may admit it under the theory that the normal and “natural reaction of an innocent man to an untrue accusation is to enter a prompt denial.”  The judge must then determine, if no denial is made, whether the circumstances called for a response, whether the accused understood the accusation, or whether the response really can be fairly inferred as a guilty conscience.”
The citation for the Fifth Appellate District Court ruling discussed above is People v. David Lee McDaniel, III (5th App. Dist., 2019) 38 Cal.App.5th 986.
For more information about self-incrimination, please click on the following articles:
Contact us.
Serving Torrance, Long Beach, Compton, Airport Courthouses and Other Courthouses.