A jury in San Mateo County convicted John Paul Graves of one felony count of annoying or molesting a child under 18 (Penal Code § 647.6(c)(2)) and one felony of count of lewd acts involving a child of 14 or 15 years old by a person at least 10 years older (Penal Code § 288(c)(1)).
The judge later found true allegations that Graves had two prior felony convictions within the meaning of Penal Code § 647.6(c)(2) and that Graves had served three prior prison terms within the meaning of Penal Code § 667.5(b).
The judge then sentenced Graves to four years in state prison, the middle term, on the 647.6(c)(2) count.  On count 2, the 288(c)(1) charge, he was sentenced to two years in state prison, stayed under Penal Code § 654.  An additional year was imposed for one of the three prison prior for a total sentence of five years in state prison.

Brief Synopsis: An enhanced sentence for a sex offense under Penal Code § 647.6(c)(2) was found proper in the following case wherein the defendant challenged how to interpret the statute’s terms – and his requested interpretation was rejected.

The case arose on May 20, 2016, when Jane Doe and her friend Lucy went shopping at a mall in San Mateo.  Jane was fifteen years old.  Graves came up to her, put his hand on her right buttock and “squeeze[d] tight.”  He then went to the store’s changing room, removed his shirt, and stepped out of the changing room multiple times.  He was bare chested and made eye contact with Jane each time.
Within minutes after Graves grabbed her, Jane told her friend Lucy what had happened.  Jane and Lucy then told the store employees.  Mall security then detained Graves until police arrived.
After being sentenced, Graves appealed on multiple grounds.  The scope of this article will only consider his argument that his four-year sentence was improper because in his two prior felony convictions for violation Penal Code § 647.6, neither involved a minor under 14 years of age.
Graves made this argument in reference to section 647.6(c)(2), which states, “[e]very person who violates this section after previous felony conviction under Section 261, 264.1, 269, 285, 286, 288.5, or 289, or former section 288a, any of which involved a minor under 16 years of age, or a previous felony conviction under this section, a conviction under Section 288, or a felony conviction under Section 311.4 involving a minor under 14 years of age shall be punished by imprisonment in the state prison for two, four or six years.” 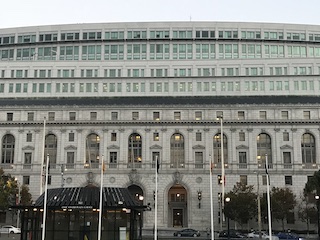 Court of Appeal First Appellate District San Francisco
To most people who consider this argument, it strains credibility.  After all, the final conditional phrase cannot apply to the earlier crimes.  Standard English just cannot be interpreted that way.  However, to find a solid principal or legal reason for what one “just knows” by reading the plain words can be tough.
The First Appellate District, in People v. John Paul Graves (2020 DJDAR 2081) also disagreed with Graves’ strained interpretation.  However, it found legal grounds for its position.  It cited to the apparently longstanding “last antecedent rule” of statutory construction that “qualifying words or phrases and clauses are to be applied to the words or phrases immediately preceding and are not to be construed as extending to or including others more remote.”  White v. County of Sacramento (1982) 31 Cal.3d 676, 680.
“Evidence that a qualifying phrase is supposed to apply to all antecedents instead of only to the immediately preceding one may be found in the fact that it is separated from the antecedents by a comma.”  Id.  However, the use of a disjunctive such as the word “or” denotes alternative or separate categories.”  Id.
Applying the “last antecedent rule” to subdivision (c)(2) of section 647.6, “the phrase ‘involving a minor under 14 years of age” modifies the immediately preceding phrase “or a felony conviction under Section 311.4” only.  The appellate court thus concluded the phrase “involving a minor under 14 years of age” does not extend to other clauses in section 647.6(c)(2).
Moreover, the limited application of this phrase to just convictions under 311.4 makes sense because the other listing of other convictions (261, 264.1, etc.) are all modified by the phrase “any of which involved a minor under 16 years of age.”
Consequently, the appellate court affirmed the trial court’s sentence of four years.
However, because Penal Code § 667.5(b), the sentencing enhancement of one year for a prior prison term, no longer exists as of January 1, 2020, the appellate court remanded the case for resentencing on that term only, which should spare Mr. Graves one year in state prison.
The citation for the First Appellate District Court ruling discussed above is People v. John Paul Graves (1st App. Dist., 2020) 46 Cal. App. 5th 231, 259 Cal. Rptr. 3d 596.
For more information about child molestation, please click on the following articles:
Contact us.
Serving Torrance, Long Beach, Compton, Airport Courthouses and Other Courthouses.