As the reader of this article may be aware, 28 U.S.C. 2244(b) generally bars a second or successive petition for writ of habeas corpus without authorization from the court to file it.  The purpose of such a law is to promote finality and respect for judicial decisions and discourage prisoners from filing the same petition for writ of habeas corpus over and over with the same arguments restated in some misguided hope that a patient judge will finally sympathize and just grant the petition.

However, habeas petitions that are filed second-in-time are not necessarily second or successive.  Panetti v. Quarterman (2007) 551 U.S. 930, 943 (“The phrase ‘second or successive’ is not self-defining”); see also Slack v. McDaniel (2000) 529 U.S. 473, 486 (describing the phrase “second or successive petition” as a “term or art”).
Indeed, in Magwood v. Patterson (2010) 561 U.S. 320, the U.S. Supreme Court pointed out that “both 2254(b)’s text and the relief it provides indicate that the term ‘second or successive’ must be interpreted with respect to the judgement challenged.”  Magwood, at 332-33.  A second petition may be permissible, as it was in Magwood, when it challenged “a new or intervening judgement” and was therefore not a second or successive petition.
Such a “new and intervening judgement” challenged in a habeas certainly includes a challenge to an earlier challenged conviction and sentence at a lower court level.
In California, appeals may be taken only from the original conviction or from a post-judgment order “affecting the substantial rights of the party.” Penal Code § 1237.  The California Supreme Court has held that the denial of a resentencing petition under Penal Code 1170.126 is an appealable “post-judgment order affecting the substantial rights of the party,” as opposed to an appeal of an original conviction.  Teal v. Superior Court (2014) 336 P.3d 686, 689-690. 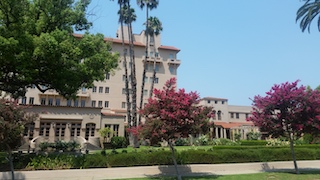 U.S. Ninth Circuit Court of Appeals Pasadena
Consequently, under California law, a resentencing petition does not challenge the underlying conviction or sentence; rather, it seeks to obtain the benefits of a new law, i.e., Proposition 36, and if unsuccessful, results in the entry of a new appealable order or judgement.
This played out in the case of Curtis Clayton.  In 1997 in Los Angeles Superior Court, Clayton was convicted of three felonies: carjacking (Penal Code § 215(a)), second degree robbery (Penal Code § 211) and evading a police officer (Vehicle Code § 2800.2).
At the time, under the Three Strikes Law in effect in 1997 (Penal Code § 667), an indeterminate sentence of 25 years to life was mandated if someone had previously been convicted of two or more “serious or violent” felonies, defined as so at Penal Code § 667.5 and Penal Code § 1170.12.  After a sentencing error was corrected, he challenged his sentence and was denied.  He then filed a petition for writ of habeas corpus in federal court and that was denied as well.
In November 2012, California voters approved Proposition 36, also known as the Three Strikes Reform Act, which sought to remedy the harshness of the Three Strikes Law prospectively and retroactively.  With certain exceptions, Prop 36 requires that the third strike be a serious or violent felony.
For defendants sentenced under the prior Three Strikes Law, Proposition 36 includes a resentencing provision that entitles defendants with a non-serious or non-violent third strike to petition for resentencing.  Penal Code § 1170.126.  Unless delayed for good cause, defendants seeking resentencing were required to petition the court that entered the judgement of conviction within two years of Proposition 36’s passage.
In November 2012, Clayton promptly filed a petition in Los Angeles Superior Court seeking resentencing.  Without providing him a hearing, the superior court found Clayton ineligible for resentencing and denied the petition.
Clayton appealed, but the Second Appellate District Court of Appeals in Los Angeles affirmed and the California Supreme Court denied his petition for review.
In 2014, Clayton filed a pro se habeas petition in the U.S. District Court challenging the decision rendered without a hearing.  Clayton argued that the resentencing petition involved a liberty interest because his sentence could be lowered dramatically and the state court deprived him of that interest without affording him procedural due process when it denied his petition without a hearing.
The district court denied his petition for lack of jurisdiction, concluding that it was a successive petition and Clayton had not obtained authorization from this court to file it, as required by 28 U.S.C. § 2244(b)(3).  It determined that he was challenging his original sentence a second time.
Clayton then filed a application order under 2244(b)(3) to the Ninth Circuit Court of Appeals in Pasadena, which determined that his appeal was not a second or successive habeas petition at all because he was not challenging the underlying conviction or sentence.  He was instead challenging an intervening order or ruling, specifically the ruling on his Prop 36 petition for resentencing.
We bring this short summary to the reader’s attention because we often get phone calls about folks wanting to file a petition for writ of habeas corpus when they truly are challenging the same exact ruling a second or successive time, in violation of 2243(b).  However, on occasion, there is an intervening petition for resentencing that should be the focus of the habeas petition instead, to avoid the 2243(b) bar.
The citation for the U.S. Ninth Circuit Court of Appeals ruling discussed above is Curtis Lavell Clayton v. Martin Biter, Warden (9th Cir., 2017) 868 F. 3d 840.
For more information about petitions for writ of habeas corpus, please click on the following articles:
Contact us.
Serving Torrance, Long Beach, Compton, Airport Courthouses and Other Courthouses.