Home
Other Information
Criminal Defense Articles
When Can a Victim’s Hearsay Statement Be Admissible?

When Can a Victim’s Hearsay Statement Be Admissible?

It is quite common for clients or family members of clients to say, “I’m really happy that the victim is not coming to trial.  Her statement is hearsay, so it cannot be admitted into evidence.”

Our response to such a comment, usually posed as half-question and half-demonstration that the speaker has a vague idea of what is hearsay, is to comment, “well, that might be true.”

This comment usually leads to a discussion of Evidence Code § 1370, which allows the admission of hearsay statements of victims of physical violence in certain situations.  While this may seem like a way to make an end-run around the Sixth Amendment right to confront witnesses being offered against oneself (the “Confrontation Clause”), 1370 has been found to be constitutionally sound.  People v. Hernandez (1999) 71 Cal.App.4th 417, 83 Cal.Rptr.2d 747.

In other words, if the victim moves to Canada at time of trial, this might be a major problem for the prosecution, but not necessarily.

In a Nutshell: A victim’s out of court statement being offered for the truth of the matters stated therein (hearsay) can be admissible if it satisfies the five requirements of Penal Code § 1370.  This is a rigorous test that often cannot be met by the prosecution.

Section 1370 requires five things.  First, the hearsay statement must describe, explain or narrate the infliction of physical harm or the threat of harm to the victim.

Second, the prosecution must establish to the judge that the victim is unavailable, which is a rigorous standard under Evidence Code § 240.  For a witness to be unavailable, the witness can be dead or otherwise unable to testify due to a physical or mental infirmity.  The witness can also be unavailable to testify and the court cannot compel the victim’s attendance, i.e. through subpoena.  The prosecutor could also ask that the judge declare a witness unavailable if the prosecutor has exercised reasonable diligence in attempting to bring the witness to court via subpoena.  The witness also may be uncooperative in coming to court and may even be found in contempt of court orders to come to court for trial, but persistently refuses.  When any of these conditions arise, the prosecutor can read into evidence the hearsay statement of the victim. 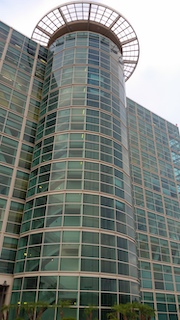 Airport Courthouse
Third, the hearsay statement of a victim must be made at or near the time of the infliction of the harm, i.e. it must be contemporaneous, and not more than five years before the action is filed.

Fourth, the statement must be made under circumstances that indicate its trustworthiness.  This is the area that causes the most debate, as some victims can think very fast as to how to lie or call 911 in a fabricated emotional state, even crying to the 911 dispatcher, and then give great detail that suggests reliability.  In our experience, the criminal history of the victim and his or her reputation for honesty can become a ground for great debate.

In considering trustworthiness, it is important for the judge to consider whether the statement was made in contemplation of pending litigation or anticipated litigation, i.e. a family law matter, a child custody battle or immigration proceedings, in which the declarant is considered an interested party.  The judge must also consider whether the declarant has a motive or bias for lying and the extent of the bias or motive.  Lastly the judge should consider if there is any corroborating evidence other than just statements.

Fifth, and lastly, the statement must be made in writing, electronically or to law enforcement.  Most commonly, it is a call to 911, which is recorded.

In our experience with 1370 issues, if we know from our client that a victim who made a statement to police may intend to leave the jurisdiction at time of trial to protect our client, it is prudent to keep this information to ourselves, not to share it with the prosecution.  If we were to share it with the prosecutor, he or she could take steps to establish the witness as unavailable, which is often the hardest part for a prosecutor to meet of the five requirements.