Home
Other Information
Criminal Defense Articles
When Can a Missing Witness’ Prior Testimony be Admissible?

When Can a Missing Witness’ Prior Testimony be Admissible?

Defendants Harquan Johnson and KeAndre Windfield were each convicted of one count of murder and one count of attempted murder, as well as assault with a semi-automatic firearm, gun discharge and gang enhancements allegations following the 2009 shooting of two members of their own gang, the Ramona Blocc Hustlas in San Bernardino.
Judge Steven A. Mapes in San Bernardino Superior Court sentenced each to ninety years to life in state prison.

The sentence as to Harquan Johnson was later modified after the rulings in People v. Gutierrez (2014) 58 Cal.4th 1354 because Johnson was a juvenile at the time of the crime (Windfield was 18) and his sentence of 90 years to life was considered the functional equivalent of a term of life without the possibility of parole.  Later in 2016, the judge also reviewed the sentence further for Johnson in light of People v. Franklin (2016) 63 Cal.4th 261.
Both defendants filed petitions for writs of habeas corpus later, which made their way up to the California Supreme Court, which then transferred the cases back to the Fourth Appellate District in Riverside to reconsider whether the admission at trial of testimony from an unavailable witness was unconstitutional under the Sixth Amendment right to confront a witness and the recent case of People v. Canizales (2019) 7 Cal.5th 591 and People v. Perez (2016) 3 Cal.App.5th 612, 619.  The writ included five additional grounds for reevaluation, but this article will only focus on the Sixth Amendment issue concerning the reading of the prior testimony at trial. 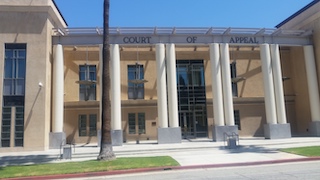 4th Appellate District Division 2 Riverside
The unavailable witness was a woman named Nikki R., a witness that the judge considered a “critical witness” and the only witness to the crimes.  Nikki testified at the preliminary hearing under oath and subject to cross examination.  She described how she had watched each defendant shoot Montayea Smith and Ricky Peete.  Her testimony was also videotaped, as was common in gang cases, so it could be seen and heard, rather than merely read.
After testifying at the preliminary hearing, Nikki R. moved out of state in October, 2009 with financial assistance from the district attorney’s office.  She provided her address to the district attorney investigator.  However, the district attorney’s office then lost contact with Nikki, as she moved several times.  The district attorney’s office tried to find Nikki by asking family members who had regular contact with her.
At trial, the prosecution advised the judge that they had lost contact with Nikki R.  They then explained all their efforts to find her and the judge concluded that they prosecution had established due diligence and permitted the People to play the videotaped testimony to the jury at trial.
On appeal, both defendants argued that the People did not employ “due diligence” in efforts to secure Nikki R.’s attendance at trial.
The Fourth Appellate District Court of Appeal disagreed with defendant, in its ruling People v. Keandre Dion Windfield (2019 DJDAR 11973), filed on December 20, 2019.
The appellate court began its analysis by reminding the reader that under both the federal and state constitutions, a criminal defendant is guaranteed the right to be confronted with the witnesses against him.  U.S. Const., 6th Amend; Pointer v. Texas (1965) 380 U.S. 400, 403-405, 13 L.Ed.2d 923, 85 S. Ct. 1065.
“If a witness is unavailable at trial and has given testimony at a previous court proceeding against the same defendant at which defendant had the opportunity to cross-examine the witness, the previous testimony may be admitted at trial.”  People v. Sanchez (2016) 63 Cal.4th 411, 440.  Prior trial or preliminary hearing testimony is admissible only if the defendant had an adequate opportunity to cross-examine and if the government has established the unavailability of the witness.  Crawford v. Washington (2004) 541 U.S. 36, 57, 59, 158 L.Ed.2d 177, 124 S.Ct. 1354, citing Mattox v. United States (1895) 156 U.S. 237, 244, 39 L. Ed. 409, 15 S.Ct. 337.
The prosecution has the burden of showing it made a “good faith effort” to secure the attendance of the witness at trial.  Barber v. Page (1968) 390 U.S. 719, 725, 20 L. Ed. 2d 255, 88 S. Ct. 1318.  Alternatively, the prosecution must show it exercised reasonable or due diligence to obtain the witness’ presence at trial.  People v. Cromer (2001) 24 Cal.4th 889, 892.
In California, the exception to the confrontation right for prior recorded testimony is codified at Evidence Code § 1291(a), which provides that prior testimony is not made inadmissible by the hearsay rule if the declarant is unavailable and the defendant against whom the testimony is offered had a prior opportunity to cross-examine the witness.
Evidence Code § 240 governs unavailability of a witness and the required due diligence and reasonable efforts required to find that witness.  “Due diligence” means “persevering application, untiring efforts in good earnest, efforts of a substantial character.”  Cromer, supra, 24 Cal.4th at 904.  “Relevant considerations include whether the search was timely begun and whether the leads were competently explored.” Id.
In the case of finding Nikki R. here, the Fourth Appellate District Court found that the prosecution had made sufficient efforts to find her, so there was no mistake by the trial court in letting the prosecution play the videotaped testimony of her from the preliminary hearing.
The citation for the Fourth Appellate District Court ruling discussed above is People v. Keandre Dion Windfield (4th App. Dist., 2019) 44 Cal. App. 5th 196, 257 Cal. Rptr. 3d 189.
For more information about missing witnesses and unavailability issues, please click on the following articles:
Contact us.
Serving Torrance, Long Beach, Compton, Airport Courthouses and Other Courthouses.